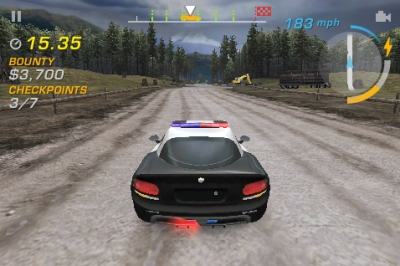 Need for Speed: Hot Pursuit brings the Burnout styling of the reborn console game to the iPhone. Although more diminutive than those versions, the range of real cars and clash of metal on metal still got the racer in me going.

Need for Speed: Hot Pursuit places you in the driving seat of some ridiculously powerful police cars as you try to tackle the menace of road racers. The 3D graphics look great, especially for a phone, while the mixture of game modes and controls make Hot Pursuit great fun to play. If you're a bit of a petrol head you'll love the range of cars available, even if you do wince at the thought of bashing them into another vehicle.

It's been a while since I've played anything from the Need for Speed franchise -- the last being Most Wanted, which is at least five years old now. My view of Need for Speed was firmly planted in the mind-set of being the guy who's trying to get away from the police, so it was something of a surprise to settle down to a game on my iPhone and discover I'd switched sides.

Need for Speed: Hot Pursuit, in case you haven't guessed, casts you in the role of a traffic cop out to catch people illegally racing on the roads. Fortunately it's a little more exciting than capturing registration numbers and comparing them to the DVLA database, with the opening video showing a police-liveried Bugatti Veyron tackling a perp. Quite apart from the fact that the petrol head in me cringes at the sight of a Veyron being use to bash another car, it looks fantastic.

The video is obviously pre-rendered, as the in-game graphics don't look quite as crisp. I can't help being amazed, though. I mean, here I am with my mobile phone running a 3D driving game that, not that long ago, would have taxed a desktop computer. I still remember the moment I installed a 3D graphics card in my PC and marvelled at how things looked, but that same technology now sits in the palm of your hand.

All of which is to say Need for Speed: Hot Pursuit looks very good. It's not photo-realistic or anything like that, but it is good looking and you can tell the difference when you upgrade to the next available police vehicle.

Although I know they aren't real, there's still a degree of excitement at unlocking a car I particularly like.

There's quite an impressive range of vehicles included in the game, with offerings from Nissan, Mitsubishi, Subaru, Ford, Porsche, BMW, Chevrolet, Dodge, Lamborghini, Koenigsegg and Bugatti. The weird thing is that, although I know they aren't real, there's still a degree of excitement at unlocking a car I particularly like. I guess that's the point -- to put the car maker's brand in front of as many eyes as possible in the vain hope that one day you graduate from playing on the iPhone to actually being able to afford a Supercar.

On the driving front, though, I always have a problem with driving games on the iPhone and the Wii. It's a combination of things: the controller is turned like a steering wheel, but it doesn't feel like one. It's also not mounted on anything, so I find I over compensate at corners and end up snaking my way down the road. Compare that to playing F1 2010 with my wireless Xbox 360 steering wheel and it's a whole other ball game.

Having said that, I'm wondering if there's been some trickery applied to the controls for Need for Speed: Hot Pursuit because I'm not actually that bad at it. I found I was easily able to squeak past a truck coming the other way. On just a few occasions I would hit it by accident and, presumably, give the driver a bit of a shock.

iPhone games tend to get old quite quickly for me. I play them for a while and then realise it's just the same thing over and over again and, to be honest, it gets boring. Need for Speed: Hot Pursuit could very easily fall into that trap. It's just driving, chasing other cars while trying to avoid innocent road users.

However, there are several game modes that mix things up a little. There's a single suspect mode where you're trying to take down one racer as quickly as possible, or there's a multi-suspect version where you have a set amount of time to take down as many cars as possible. In both of these modes you bash into the other car to damage it, or you can deploy EMPs, spike strips or roadblocks to help. The other two scenarios are a race between you and your cop friends, and a timed run where you have to reach the crime scene as quickly as possible. It's enough to give some variation while staying true to the purpose of the game.

Need for Speed: Hot Pursuit is a great driving game that feels solid and entertaining. At GBP 2.99 (at time of writing) it's an inexpensive and worthwhile addition to your mobile gaming library.


You can support Jon by buying Need for Speed: Hot Pursuit