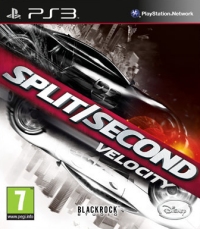 Other GamePeople columnists have reviewed this from their perspective - huh?:
Family Gamer (360)
Scared Gamer (360)
Tech Gamer (360) 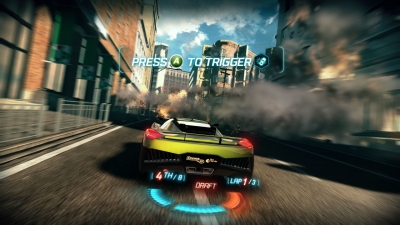 Split/Second PS3 made me question my real racing roots. But with such a focus on the driving, and heart warming visuals I can't argue with this arcade racer. It knows what it is and delivers in spades.

Split/Second comes from Blackrock Studios who were responsible for the much underrated off-road racer Pure.The finesse and attention to detail are evident here as they take us back to the halcyon days of pure explosive racing.

Although I usually like my racing to be more about apex brushing, line hugging and realistic physics, Split/Second didn't take long to win me over. Compared to the grizzly delights of Grid or Gran Turismo, it's like a big lovable puppy that doesn't quite realise its own strength yet.

If you are going to have an arcade racer then why not have one that knows what it is and plays to these strengths. Before you get to any novelties Split/Second impresses with visual clarity and pyrotechnics that challenge any player not to smile. The cars aren't lifelike by any means, but they are still beautiful in a shiny Burnout kind of way.

The game itself is unavoidable comparable to Burnout too, although not the daunting open world of Burnout Paradise, this is more like revisiting Burnout 2 of the PlayStation 2 and Gamecube era. Like that it has the feeling of a game not quite stretch to its limits yet. Because of this the racing itself is able to take the front seat.

Rubber banding undoubtedly plays a part in keeping the races on a knife edge, but it never overly intrudes - allowing skilful driving and drifting to establish a lead for focused racers. Collision physics are at times a little touchy, there were a few occasions I brushed a parked car only to be sent flying. But these rough edges are all part of the lovable juvenile joy of the thing.

If you are going to have an arcade racer then why not have one that knows what it is and plays to these strengths.

The arcade racing would be enough for me, but gaming being what it is there of course is a hook to justify the games existence. As you probably know the unique seller here is the ability to destruct the track itself.

As you drift, jump and draft you fill your Powerplay meter. Each section of the gauge then enables you to trigger events in the road up ahead to wipeout your opponents - and if ill-timed, yourself. These Powerplay events range from an explosive barrel dropped from above, to bringing down massive structures across the road to alter the circuit.

What sounds like it would introduce the random novice appeal of shell-attacks is actually a lot friendlier to the racing. As much as in any simulation game, here you have another reason to know the circuit in detail. But not only the corners and straights, you now need to note where the different Powerplay events are. The timing is critical if you are to land one accurately on the car in front.

There is as much of a racing buzz here as there is in any simulation game.

Split/Second manages to combine these features in an experience that has to be played to be understood. Driving with the camera stuck to the front bumper, swerving to miss upcoming attacks whilst keeping half an eye on the road ahead for your racing line and Powerplay opportunities is a delight. There is as much of a racing buzz here as there is in any simulation game and - those being my usual preference - I don't say that lightly.

All this is wrapped up in a campaign mode that progresses through half hour seasons. You build up points towards new tracks and cars by winning races until you have enough to enter the Elite race finale. Here Split/Second manages to squeeze more tempo and explosions into the experience to provide a suiting end to the season's antics.

It's a shame there's only support for two player local multiplayer, although you can race with eight others online. Also, the need to slowly unlock quick play and split screen tracks again speaks of the focus on the racing - as opposed the Blur's karting antics with these unlocked from the start.

I find myself strangely drawn to it's slightly old school re-imagining on the arcade racer.

I had expected to critique Split/Second's fast and easy attitude to the realities of racing. Having played it though, I find myself strangely drawn to its slightly old school re-imagining on the arcade racer. You might be tempted to wait for a fleshed out sequel, but I suspect that in hindsight this will be the version to play - before it feels the need to grow up or add more complexity.

You can support Jon by buying Split Second