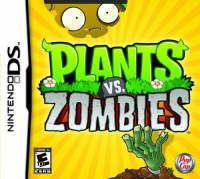 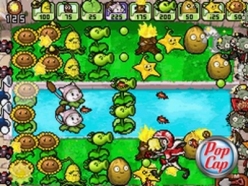 Plants vs Zombies DS has loveable cartoon Zombies that shuffle, dance, dig, run, balloon and bungee their way towards your house in waves, and you have a bit of a giggle repelling them to a soundtrack of groans and falling heads and limbs.

You take your stand against the oncoming hoards with life-preserving plants, harnessing the sun's power and scatter seed far and wide. If you get it right your pea-shooters, cherry-bombs and squashes will repel the attack. If not the sound of your screams will reverberate through the neighbourhood as your skull is wrenched open to reveal the brain-food inside. You never see it of course - that would be Nasty.

If you manage to fend the grey masses away from your front garden, they'll make a play for the back. Then they'll try under the cover of darkness when there's less chance for plants to grow or when it's foggy so you can't see them. And if all else fails there's the roof.

There's no doubt that the game is a fun way to spend a few minutes. But as I've been whiling away my time sowing the seeds of survival, I've begun to ask myself what else is talking root in the heart of my family?

Take my five year old James. He has a bit of a one track mind, and recently it often seems to be on the DS.

'Which do you prefer...' (at this point you could normally add any two randomly chosen characters from Mario Kart, but not today) '...Plants vs. Zombies or Zombies vs. Plants?'

Now there's a question. A day or two previously he'd seen me playing I-Zombie, one of the mini-games where you can play at being the Zombies for a change. He couldn't have watched me for more than 5 minutes or so, but he had clearly been thinking about it a lot.

It's no more gruesome that your average Lego minifigure.

So I made some vague non-committal answer and tried to move on. James is not easily diverted.

'Which is your favourite Zombie?'

'I don't really have a favourite'

'Not really. They're OK.' A further attempt to change the subject 'To be honest I don't really think about it very much.'

And so I am exposed. Should I be thinking about it a bit more?

My wife tells me that the game is horrible but I can easily sidestep that. It's no more gruesome that your average Lego minifigure. Heads get pulled off them all the time, and we've got aliens, vampires, and cyborgs, not to mention Frankenstein's monster. Zombies are just the same aren't they?

A day or two later seven year old Jon asks to have a go. He really wants to. The PEGI 12 rating is a bit over the top isn't it?

So he starts with another mini-game. Whack-a-Zombie. Just use the stylus to whack them on the head as they appear from the ground. Also Walnut-Bowling is quite easy.

It's endearing to hear your kids wandering around muttering 'Mmmm.......Brains' but there come a point where you have to draw a line.

Jon does get a bit frustrated as he struggles to complete the game, but he really wants to play so before I know it he's started from the beginning and working his way through the adventure levels.

Now it's all he wants to do. Something that for me was a bit of fun has become an obsession. Sure, it's endearing to hear your kids wandering around muttering 'Mmmm.......Brains' but does there come a point where you have to draw a line and say enough is enough?

Just what is it that we've unleashed? There is no doubt that the DS has changed my family. I'm not sure I like it.

You can support Chris by buying Plants vs Zombies