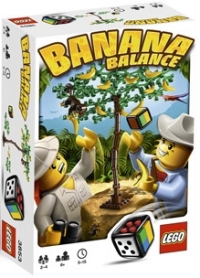 Banana Balance is among the latest of a growing number of Lego board games releases, and is a take on the classic manual dexterity and balancing games ranging from pick-up-sticks to Jenga.

As such it promises a bit of fun, a bit of suspense and hopefully 15 minutes or so of light relief either with your kids, or away from them if you can persuade them to play nicely on their own.

I've been a bit slow off the mark with Lego games, so I was keen to give it a go. The stated age range (6+) suited my oldest boy Jon well, and the two of us are already pretty enthusiastic about Lego, so it seemed the perfect opportunity to increase his interest in board games.

But let's just forget for a moment that this is Lego. Any real or supposed loyalty to the brand (and my family is pretty loyal) ought to count for nothing. The game either works or it doesn't. So does it?

The game itself turns out to be very simple. You build the Lego tree (2 minutes) and then you roll the special dice to determine whether you have to add a leaf to the tree, add a banana to a leaf, or if you're lucky hang the monkey by its tail from a banana-bearing leaf which lets you remove all the bananas from that leaf. You then have to hope that the tree doesn't overbalance at the end of your turn so you need to plan ahead and have a basic understanding of how things balance. And of course the person with the most bananas wins.

Tellingly there hasn't been much interest in a rematch.

It sounds pretty good, but it's collecting dust on the shelf. That's not to say that it was a complete flop. We were keen to start with, but after a while it just seemed that there was something missing. It turned out that it was both the fun and the suspense.

When the dice falls on the green and yellow side you have to place both a leaf and a banana on the tree - 'Double Trouble!' But in reality it wasn't nearly as edgy as it sounded and a bit of an anticlimax.

Similarly if the monkey falls off the tree you have to shout 'Bananas!' We never got to do this as the monkey's tail could stick pretty firmly to the leaves, particularly when Jon was in charge. In fact it stuck so well that it was virtually impossible to remove the monkey without pulling the leaves off as well, and after that it all started to degenerate.

Tellingly there hasn't been much interest in a rematch. I'm not even sure we got as far as finishing the first game. I played it later when the kids had all gone to bed, hoping that there was something great that I had missed, but I still couldn't see it.

I'm just not sure that is going to impress a 6 year old who got the game to play it.

I have the greatest admiration for Lego designers. The products that I've seen recently have been clever, often witty and always engaging. But this just seems a bit half-hearted. The main disappointment is simply that it's not much fun, and that's about as bad as it gets for a game intended for 6 year olds.

So this all got me wondering if in fact the main interest in the game is that it has some unusual Lego pieces in it. You get 12 bananas (useful if you want to open a greengrocers), some brown Technic pieces (though I never was quite sure what to do with that stuff) and those large floppy leaves. I'm just not sure that is going to impress a 6 year old who got the game to play it.

So maybe it is all about the Lego after all. Maybe the designers were having an off day. Maybe it's just not right for us. Whatever, the jury is out for us on Lego games. But that Shave a Sheep game does look good.

You can support Chris by buying Banana Balance Game