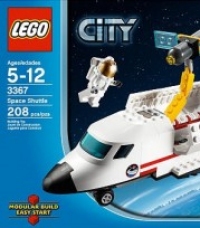 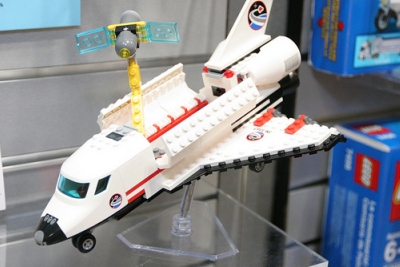 My kids and I have been building our very own perfect community from the Lego City range. Arguably we're a bit light on normal houses, shops, schools, and that sort of thing (where are all the children anyway?) but we're getting there.

Well we're building for the future, and internal flights are just so yesterday. There's no peak-oil anxiety in a world of unlimited plastic.

At first sight you might think that the Space Shuttle 3367 is an odd addition to the Lego City range. I loved the old Space range that my brother collected in the early 80's, but that all came with lunar landscape baseplates and moon-based space units. The latest range is by and large earth-based and in addition to the Shuttle includes a Space Centre 3368, Satellite Launch Pad 3366 and a curious Moon Buggy 3365 driven by a man in a baseball cap.

I had promised James (5) that I would help him build the Shuttle on the weekend, and so on Saturday morning at 6.45am he arrived by my bedside with the large box and an even larger tray and bleary-eyed the day began.

By the time it was finished all three of my boys were looking on in awe.

Until recently he's been a bit lacking in confidence with his Lego construction skills, being rather in the shadow of his older brother, but we worked away together for an hour or so. The instructions are very well laid out and easy to understand, and the stated age range of 5-12 years seems about right.

Even so, James' concentration waned towards the end, and I had to finish the Shuttle on my own (though that was no great hardship as I was wide awake by then and enjoying myself). However the excitement levels steadily increased. At each stage the part-completed kit took a test flight, and by the time it was finished all three of my boys were looking on in awe.

There's no denying that it's a pretty cool kit. It's solid when all constructed which is just as well because it's going to get a lot of use. I guess that the pieces you get will be good for making other spaceships, but the Shuttle is likely to stay intact for some time to come as it looks great and has enough functionality to keep the boys interested.

But I do worry about that coffee cup in the cabin.

The payload bay opens up to reveal that all important satellite and moveable Canadarm (informative as well as fun) and the astronaut's space walk helmet is also safely stashed away. You have to use your imagination to work out how he gets it on as there is no door between the cabin and the bay, but then most Lego houses don't have stairs so let's not get hung up on details. It never worried me and it doesn't worry my kids.

But I do worry about that coffee cup in the cabin. Shouldn't it have a lid and a straw or something? And it's sitting on top of all the computer equipment -- surely that's in breach of health and safety. And what about that poor astronaut being all on his own? Haven't they heard that it's lonely out in space? I guess he'll have to slip in a few stowaways. Or maybe ditch the satellite and just go straight for the long-haul service for starry-eyed Lego folk. If James' 3 year old little brother keeps pulling their hair off they'll be glad to escape.

You can support Chris by buying Space Shuttle 3367