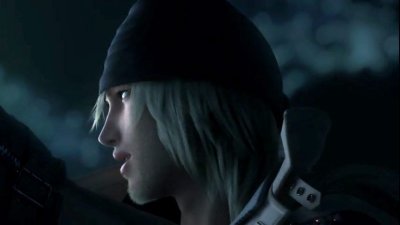 Final Fantasy XIII has changed while I've been away. Playing Final Fantasy in the 90's I was in love, but coming back I find a different experience in its place. It's grown up, but not quite how I expected, or wanted it to.

There are many reasons I love Final Fantasy X, but its elegant communication of its world is most telling. Yuna's pilgrimage stops in many villages left devastated by the tsunami-like Sin. Not only is the absence of survivors unsettling, but the revelations, breakdowns and bonds that Yuna's party makes on the road that really got to me.

For all the unreality of Spira, I understand Wakka's incapacity to move on from his brother's death, I relate to Tidus living in the shadow of his lost father, and I sympathize with Yuna's self-sacrificial mission to end the torment. Fantasy it may be, but Spira feels grounded within reality.

But nine years after Final Fantasy X's release, and storytelling has gone backwards. I feel not even an iota of connection with Final Fantasy XIII's worlds of Cocoon and Pulse, and this coming from someone who managed to find a slither of something to hold onto in the skin-deep beauty of Avatar. Final Fantasy XIII's scenery is just as pretty, its plot just as grandiose, but there the similarity ends. Characters here are a shadow of former glory - parties that once felt so human now feel shallow and disconnected.

As with all the (main) Final Fantasy games, the plot concerns the party escaping a predetermined fate - this time it's a centric feature from the outset. From there though, little actually occurs beyond my party's escape attempt. To distract from the dearth of plot evolution, each individual seems to oscillate from artificial high to artificial low, threatening to chuck it all in one moment then pulling others from the brink of despair the next. Even likeable heroine Lightning, a more accessible (and female) version of the typically sexy but recluse Final Fantasy lead, has her sudden bouts of mood swing. Although she's not nearly as emotionally labile as her fickle companions, most of whom I stop listening to by the game's end.

I should care when they suffer, I should cheer when they succeed. I should cry like I did when Aerith sunk deep into the pool in VII, I should struggle to contain my joy as if I was watching Zidane finally get the girl all over again in IX. Sadly, I barely have a grip on the world that XIII's characters live in, on their values, on what society means to them. So, after 56 hours of blood and sweat in XIII, there just aren't any tears.

Halfway through there is an evolution that in a matter of hours revolutionises the game.

I think that's where the criticism of XIII's linearity arises. It's not that the linearity itself is dull; Final Fantasy X has a path as set as XIII's is, but the same concerns aren't raised of that game. However, because the narrative is so poor both in style and substance, what with the flurry of disclosures flung casually at me in the first hour, I feel constricted within the path, restricted from exploring Cocoon and understanding it for myself. As it is, the big long path that is the game's first half is just that - a big long path. I have little clue where I'm going, and I don't care.

But then, halfway through there is an evolution that in a matter of hours revolutionises the game. I leave the set path of Cocoon and find myself in the big open field that is Pulse, and combat-wise the game finally becomes a fully-fledged RPG. This is refreshing. Not because I unexpectedly have so much room to explore - there's as much linearity to the side missions as there is the main quest - but because battles within this open world require real strategy. While the combat only adds to the constrictive feeling initially with its click-X-a-lot ennui, it suddenly transforms into something stylish and really rather clever.

Along with the space and strategy there comes a paradigm shift that makes the evolution complete - the ability to change-up my characters' classes in battles on-the-fly. Controlling only one character in the party, the insistence on revealing the enemy weaknesses, the different classes of the characters, the endless clicking of repeat - it all suddenly makes sense. Enemies in Pulse require me to make use of it. The huge beasties roaming round the world's expansive greenery - and it's worth underlining how spectacular Pulse can look at times with the sheer scale of all its wildlife - demand me to understand the strengths and weaknesses of my different characters.

But as someone coming back to the gaming world after quite a break I simply want to be as moved and enraptured as I was back in 2002.

Although the game had dragged until this point, it was now working hard to justify the slog. What it couldn't solve though was arguably the worst story the series has ever seen. Sure, there's always a bit of monotony with the start of a Final Fantasy game, but never this much.

In 2010's sea of strong games, for me, Final Fantasy XIII didn't deliver. Fans may well appreciate the pay-off that arrives in the combat. But as someone coming back to the gaming world after quite a break I simply want to be as moved and enraptured as I was back in 2002. While I can see some of its merits, the world it creates still remains entirely forgettable for this returning gamer.

You can support Sinan by buying Final Fantasy XIII