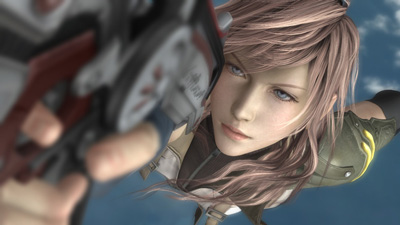 The long awaited evolution of the Final Fantasy series is set to arrive on PlayStation 3 and Xbox 360. Final Fantasy XIII brings the much beloved Role-playing game to the current-gen consoles in this stunning experience that tells a deep and involving story with the help of some of the most impressive visuals ever seen. You'll explore breathtaking environments, meet and befriend interesting characters and fight against some terrifying enemies. The new age of Japanese Role-playing games begins with Final Fantasy XIII: Fabula Nova Crystallis.

Taking full advantage of the advanced hardware on offer, Final Fantasy XIII provides a stunning example of in-game cinematics that merge seamlessly with real-time gameplay to convey the story and the world in gorgeous detail.

Set in the sealed, shell-like city of Cocoon that floats high above the surface of the world known as Pulse, Final Fantasy XIII brings together the futuristic and natural settings of previous games. Here in the city people fear the natural environment of Pulse, believing it to have mind-altering effects and a threat to the safety of Cocoon. The government of Cocoon quarantines and exiles anyone believed to be under the influence of Pulse and players will find themselves accidentally becoming the chosen ones of Pulse, enemies of humanity who are now charged with bringing down the city of Cocoon.

The story itself has some interesting themes in its epic telling and loosely bases its main plot around the consequences of 'those who resist the world'. It's a narrative that Final Fantasy has told before but nowhere has this story been conveyed with such epic scope and detail. The characters are far more complicated and real, and we find their complexities overflowing into the storyline as the game progresses.

Most notable is Lightning, the main protagonist, never in a numbered Final Fantasy has there been a female protagonist at the game's core. It's refreshing to have this strong, female lead at the centre of things. Complementing this move is the decision to give enemies more character and personality as well. Instead of faceless fiends that have pervaded previous games, enemies are now much more distinct with each of them having their own histories and motivations.

This gives the story in Final Fantasy XIII much more meaning and weight than initial impressions might suggest - it also stops the game from slipping into the schmaltzy territory found in some of its trailers. There's a tonne of depth to all the characters here, and Final Fantasy XIII succeeds in making them interesting and believable enough to care about - important when you consider the story has a length of nearly 80 hours.

A Final Fantasy mainstay that returns in a new and improved capacity is the Active Time Battle system (ATB). This has been revamped to allow a faster pace of gameplay which means you can input commands that blend together seamlessly - like making stab and slash combinations for example. It also means you can stack up attacks in advance if you're quick enough, enabling you to fully appreciate the fluid battle animations when they are carried out.

Summons also return from Final Fantasy IX and change combat situations dramatically with their devastating attacks and visual impressions. The new feature that pushes combat to even more extreme ends is the Gestalt mode. This enables a character to ride or join with their Summon to perform a unique attack. All of these are extraordinary in scope and delivery - Lightning can summon Odin and ride him into a group of enemies whereas Alexander's Gestalt mode changes him into a castle that surrounds the enemy, bombarding them with cannon balls. It's an incredible twist on the Summon attack and the fact these Summons play a major part in the story furthers the cohesive structure the entire game is blessed with.

With improvements in almost every area of its game, Final Fantasy XIII for the PS3 and Xbox 360 looks to be a triumph of design, visuals and storytelling. The way in which the game has been crafted to take advantage of the latest hardware leads to a fully immersive experience. With a story that works to grip you through 80 hours to the very end - this is looking like the most enjoyable Final Fantasy to date.

You can support Jan by buying Final Fantasy XIII