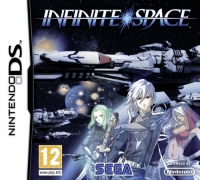 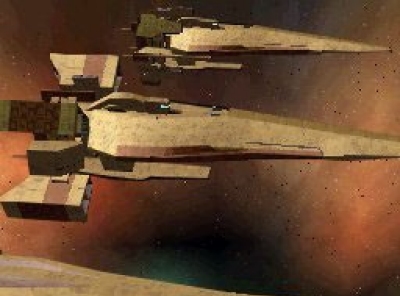 Infinite Space's brain achingly obtuse interface threatened to mask what is a rare gem on the DS. Given enough time and effort though, and there emerges through the mess a game with a spark of something special.

I have a particular itch which very few games seem inclined to scratch these days: space combat. It was with a certain amount of enthusiasm, then, that I picked up Infinite Space: the story of a youth given his own star-ship to explore the universe, and surely the framework for epic space battles, derring-do and statistical micro-management!

I'm a fairly patient gamer and one of those people that can't bear to put down even a dreadful book once I've started reading it. That said, Infinite Space came dangerously close to me chucking it out of the window after a couple of hour's play on the first night.

I did persevere in the hope of finding hidden riches. But even though I really like space battles the best I could find was a bit of a mixed bag.

I appreciated the high-quality movie intro and the way most of the story is told through in-game cut scenes (similar to Trauma Team (Wii) or Puzzle Quest) and manga-style static drawings with dialogue boxes.

The planets themselves are well designed too. Although there is quite a lot of repetition of the space-ports they are provided with different weather and lighting to break things up a little.

The sound is generally very good and the music fits the space theme well. If anything, what this game really highlights is the DS's inability to produce any kind of bass. But even after quite a bit of play I haven't found the music repetitive as can often be the case with long DS titles.

My welcome to the game-play was a shocking interface: obtuse, inconsistent.

Sadly, my welcome to the game-play was a shocking interface: obtuse, inconsistent and more obviously devoid of any user testing than any other game I have played. The save function is so counter-intuitive I ended up playing the first 45 mins of the game three times! The first boss fight requires a strategy only explained in a small part of the manual (do I really still have to read the manual like I used to back in the day?)

The crew's special abilities are explained nowhere in the game or the manual -- I had to resort to an online walk through to learn that special abilities can only be used by the first officer position. The nature of the role-based abilities which each character has are also not explained and do not have an obvious name. I'd never have guessed that "Cool & Calm" is an ability which makes the battle timer re-load faster. Sheesh.

Also, there's never really a good feeling of progression within Infinite Space. The numbers all go up, in the sense that my first ship had a shield value of 200 and now has a shield value of 1400; but, the core experience of the battles hasn't really changed. I held off writing this piece until the "fighter" skill was unlocked. I hope that the addition of an extra mechanic to the battles would provide additional variation. Sadly it does not and even though the ship to ship battles are nicely directed the fighter support seems like a cheap addition with badly animated sprites.

There is the option of melee battles in which I can board my opponent's ship and fight the crew, using a fairly predictable game of "rock, paper, scissors," but this adds little. These are an irritant and the occasions where there is a melee battle as part of the plot I really just wanted to get through them as quickly as possible.

On the plus side, the English translation of this game is far better than I would have expected for a JRPG of this kind. This is pretty essential, since the plot of the game is dialogue heavy. Nevertheless there are no occurrences of the dreaded Engrish which plagues most games in this genre. The text is a bit overlong, here and there and could have been better edited, but the main characters are well presented.

It appeals to that part of me that loves flying around space with my own fleet.

There's a nice sub-game of ship and fleet customisation. As someone who once had to abandon a game of Tetris after three hours (because I was in 'the zone' and it just wasn't getting any harder), the skill of fitting different shaped upgrade modules into the hull of the ships was very familiar and compulsive. The customisation also gave me a feeling of connection to my ships, along with being able to give them names. Since I'm not given to indelicate nicknames like some gamers, I can proudly share that I call my ships Battlestar, Heart O Gold and Hammer.

All said, though, this game does have an X factor with me. It appeals to that part of me that loves flying around space with my own fleet. Either way I find it very hard to just save and put it down. It's given me that "just one more mission" feel time and time again. It's not without its frustrations. It has a habit of leaving me guessing where I'm meant to go next to progress the story -- a bookmarked walk through is never far far away... (ed: nice!) Somehow those frustrations just aren't enough to actually keep me away.

Having initially felt like I would abandon it I've found a game with hidden beauty and compulsive exploration. I still think it's going to turn around and bite me at least once each chapter, but I think I'll probably persevere longer. Whether I see it through to the end is anybody's guess at this point.

[Chris Jarvis writes the Novel Gamer column where you can read his Infinite Space fiction.]


You can support Sinan by buying Infinite Space