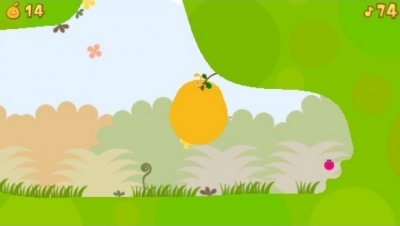 Loco Roco 2 is almost a puzzle game and almost a platformer, it reminds me of games like Bubble Bobble or Rainbow Island. It's simple - from the gameplay to the story. Not that there is much of a story, from what I could tell, an enemy called Bonmucho created an evil song that sucks the life from living things and he uses this to attempt a takeover of the Loco Roco planet. It's a bit like watching those old Saturday morning cartoons as a kid, Captain Caveman or Hong Kong Fuey.

I love the characters, each one so plain looking in design but with that bizarre, quirky almost Pacman-eqsuqe in their iconic Japanese edge. My two year old daughter adores them and sits with her head craned over the screen, hypnotised by the vivid colour, pointing to parts of the screen and making up her own names for everything.

It's the Gandhi of the puzzle genre.

The game looks like it's fallen out of the Beatle's Yellow Submarine video. Psychedelic and imaginative burst and spirals go off in all directions as you tilt and turn your way through each level. Each moment of interaction in the story had me grinning like a Cheshire cat.

It's not just the visuals that have had attention. Each level has been well designed too. Hidden paths through solid walls feel as if pulled straight from 16-bit Sonic the Hedgehog games, swinging mechanics shoot the little Loco Roco to out of reach areas and deep water can be explored by twitching your way through the depths. Eating flowers adds another Loco Roco to your bunch and holding the circle button merges them all together. This allows you to bounce higher and reach ledges.

The games ticks to its casual roots. It's not particularly taxing unless you want to find every item on each level. those that do decide to hunt all these down requires going back and playing through each level many times once you have acquired new moves or realised that there are short cuts that might be in past levels. I've found myself playing through older levels on lunch breaks or trips in the car as they only take about ten minutes to retread and twenty minutes first time round. This makes the game really easy to just pick up and put down at your leisure, there's no worrying about having to stop mid story or in the middle of some action.

I've found myself playing through older levels on lunch breaks or trips in the car as they only take about ten minutes to retread and twenty minutes first time round.

While Loco Roco 2 isn't a difficult game, there are challenges to overcome when fighting enemies. The controls don't lend themselves well to quick movements, which are needed with most bad guys, this led to lots of frustration and at times I felt my finger darting for the power switch.

With so many moments to keep you smiling, it's easy to forgive Loco Roco 2 its little issues with control. I struggled to put the game down when it's being kind to me and the levels are going well. There's a satisfaction in finding all of the items that keeps pushing me to play one more time. Now where did I put my PSP, I can't get this tune out of my head.

You can support Sinan by buying Loco Roco 2