El Shaddai: Ascension of the Metatron 360 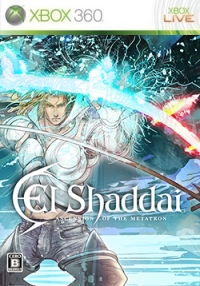 Other GamePeople columnists have reviewed this from their perspective - huh?:
Family Gamer (360)
Teen Gamer (360)
Reporting Gamer (360) 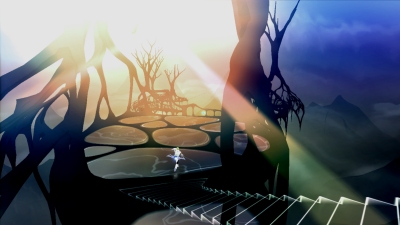 El Shaddai: Ascension of the Metatron grasps the cultural nettle in a game that not only draws on traditional texts, but employs an art-style that traverses ethnic divides. Although not hugely scary for the player, this approach will have executives biting their nails come release day.

With a striking minimalist aesthetic El Shaddai: Ascension of the Metatron is certainly eye-catching. Ignition Entertainment's Japanese development house has taken inspiration from the story of Enoch, a religious tale that remains the centre of some debate as to its validity as part of the Old Testament.

In a quick taster of the game I soon discovered these ties with the text are inconsequential. El Shaddai is first and foremost a character action title in the vein of Devil May Cry, but with other mechanics to break up the action. This combines with an amusing script to promise an unusual experience.

The game's setting is clearly heavenly - pristine white clouds supporting marble platforms formed the backdrop for the action - but how this relates to the bible is less clear. Clothed in Edwin jeans and protective armour more akin to Apple Store employees than warriors, the lead character cuts anything but a biblical image.

The character design owes much more to Japanese and American heroic archetypes than the ancient text it references. But this serves the action well and sets the mood for a game that may well straddle the two markets in a similar vein to Vanquish.

Beyond these first impressions, El Shaddai differentiates itself quickly. Although the locked play field during the first demonic battles felt familiar, combat itself was more unusual.

The style owes much more to Japanese and American heroic archetypes than the ancient text it references.

A single button controlled contextual actions that lent a natural fluidity to the action. Jumps and counters were assigned to two other buttons, but the rest of the pad was left happily redundant as the enemies were disarmed and slaughtered. Even Assassin's Creed 2 or Fable III's one press brawling felt clumsy by comparison.

Moving past the third person combat and entering a door saw the camera pull back and drop down to force action onto a two dimensional plain. From this new angle a simple platforming section began. Leaping around this area in isolation felt as genuine as any dedicated platform game. I was also pleased to discover that I still had my full repertoire of moves at my disposal, allowing me to unleash the same attack in the 2D perspective that I would in 3D.

El Shaddai will walk a fine line when it is released.

Then comes a moment of brilliance. The platforms gave way to huge oceanic waves (reminiscent of Hokusai's Great Wave) that had to be ridden to progress. Leaving the western stained glass behind me, the scene was a perfect representation for the fusion of styles throughout the game.

El Shaddai will walk a fine line when it is released. I hope the risk pays off because, in concept at least, it fascinates me. Its biggest challenge will be to engage a wider audience while remaining true to the game's core. Equally, although a blend of Eastern and Western beliefs and artistry appeals to me personally, in the current slightly ethnocentric markets it may not pay off commercially.

Even with these caveats though, I still can't wait to try the finished game and will be sure to track its development as it approaches release.

You can support Alex by buying El Shaddai: Ascension of the Metatron