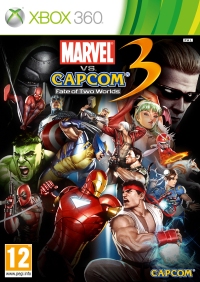 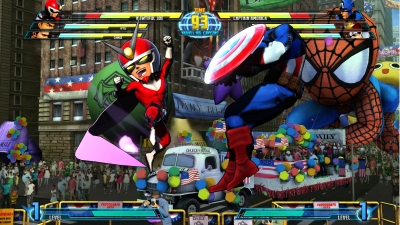 Marvel vs. Capcom 3 will take the series into high definition glory in considerable style, but I struggled to keep up with the frenetic gameplay and ever changing perspective.

Capcom's versus fighting games are unusually divorced from the refined 2D fighting mechanics of Street Fighter. This is the world of the ludicrous rather than the realistic, and it is all the better for it.

Marvel vs. Capcom 3 will borrow characters from both of the two company's properties. Heroes and villains promise to pitch in together in a tag team tussle with more explosions than a barrel full of explosive videogame barrels.

Even from a brief first look it was clear how ideally suited Street Fighter 4's inked graphic style is for the Marvel personalities, invoking beautifully their comic book origins.

Picking three characters for my team (Chris Redfield, Deadpool and Dormammu) I jumped into the action. Lush animated backgrounds frame the characters as they unleash flamboyant attacks upon each other.

Highflying acrobatics remain key, a fact that soon became clear as I launched my opponent several screens into the air.

It instantly reminded me of its predecessor despite this high-definition overhaul. Highflying acrobatics remain key, a fact that soon became clear as I launched my opponent several screens into the air, completely disorientating me as I tried to follow the arrow that indicated my location meters below.

Though much of the game will seem familiar to players of the series, the controls have undergone substantial changes - abandoning the four-button attack system of the previous Marvel titles in favour of the three-button attack layout seen in Tatsunoko vs. Capcom (Wii). Though this has no effect on the execution of special attacks it did mean that I constantly struck too high or too short to hit my opponent, frustrating in the heat of battle.

My relationship with the Marvel vs. Capcom 3 is a complicated one. I want to be excited about it, but I am really not. I know that its inclusion of my favourite gaming and comic book characters mean I should love it. But somehow the frantic play leaves my head spinning, struggling pick up on its subtleties.

So while Marvel vs. Capcom 3 is shaping up incredibly well and will certain please fans of the series, I will only be looking to acquire it for the spectacle of Chris Redfield beating up Spiderman.

You can support Alex by buying Marvel vs. Capcom 3