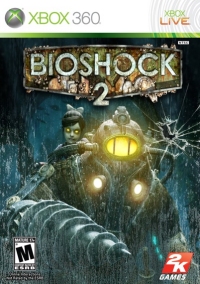 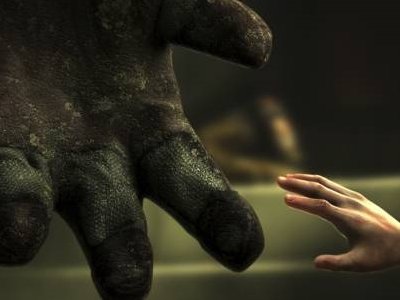 Bioshock 2's essence feels somehow diluted by returning such a hallowed location. Although the atmosphere and environments conjour up the same rich experience, the story and revelations regarding Rapture's continued demise were not nearly as powerful as they could have been.

The most fascinating part of the original Bioshock for me was the journey through Rapture. The slow descent into this failed utopia, unearthing its brave vision and ultimate destruction, went hand in hand with the discovery of your own characters history and purpose.

The real star was Rapture itself and not the compelling personalities of Andrew Ryan, Frank Fontaine and Sander Cohen. In this sequel I found neither the new parts of the city or the characters sufficiently interesting enough to hold my attention.

Though the story was quick-paced and offered a few moral choices along the way, I never felt it breached the deeper subjects the first game paid attention to.

Set ten years after the events of the first game you play as a Big Daddy, one of the hulking sea-suit wearing protectors of the Little Sisters. The premise for the game centres around finding the specific Little Sister you were bound to in the beginning. This girl also happens to be the daughter of Sofia Lamb - the game's deranged antagonist who's restarted the Little Sister project for her own disturbed philosophy.

At its heart the tale is about a father and daughter desperately trying to reunite even if the blood ties to them are a fabrication. It's a great motivator to get you to point A to B, pulling switches, throwing levers and generally causing more havoc and destruction to Rapture's continued demise.

Though the story was quick-paced and offered a few moral choices along the way, I never felt it breached the deeper subjects the first game paid attention to. There's no extension of the Ayn Rand philosophy that bled through the entire original, none of the revelations that made your encounter with Andrew Ryan or Sander Cohen so memorable or shocking.

The entire level of Ryan's Amusements gives a glorious insight into the arrogance, genius and showmanship of Rapture's founder.

It's easy to make these comparisons and portray Bioshock 2 in a less-than-flattering light. The game stands on its own as an excellent experience but I always felt the shadow of that first game hovering over my shoulder pointing out the cracks in this experience and nulling any emotional attachment I had for any of these new characters.

In many ways Bioshock 2 on PS3, 360 or PC is the greater videogame. All the technical aspects are superior in nearly every way; but with this advancement I feel many of the deeper considerations of the original have been lost. The addition of the Big Sisters - a lithe and acrobatic version of the Big Daddies - feel far too ‘videogamey' for a world such as this. The worst offenders were the Brute Splicers, the oversized and bloated enemies that felt totally out of character and looked like they belonged in Left 4 Dead rather than within Rapture's creaking walls.

This isn't to say that I didn't find pockets of true meaning. Bioshock is always at its best when Andrew Ryan is either speaking or being referred to and the entire level of Ryan's Amusements gives a glorious insight into the arrogance, genius and showmanship of Rapture's founder. Stumbling through the dilapidated museum exhibits and the broken funfair scenes evoked a real sense of history, doing a great job of making Rapture believable and more disturbing in the process.

On the stage, caught in a tender embrace were two Splicers gently dancing to the strains of The Ink Spots. It was an amazing moment.

The other moment which gave me an unexpected shock showed that the Splicers weren't always the deranged killers. In an early level I crept into a cabaret bar. On the stage, caught in a tender embrace were two Splicers gently dancing to the strains of The Ink Spots. It was an amazing moment. Here, amid the psychopathic terror of creeping around Rapture was a glimpse into the past, of when the inhabitants of this beautiful city were still human and unravaged by the addiction to ADAM.

Only after I saw their bodies lying next to each other did I realise that I had acted just as the rest of the deranged splicers would have done. Not thinking or reasoning - just succumbing to basic emotions and killing everything in my way. It made me question my motives within the game and whether or not I was just as brutal and soulless as everyone else in Rapture.

Though all these positive aspects come together to create a game worthy of the Bioshock name I could't help feel hollow at its end. The experience felt like traversing a huge Frankenstein's monster - all the parts were in the right place and a fresh life-force flowed through its veins - but Bioshock 2 ultimately lacked the same soul which made the original so unique and memorable.

You can support Adam by buying Bioshock 2