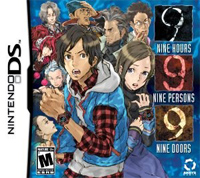 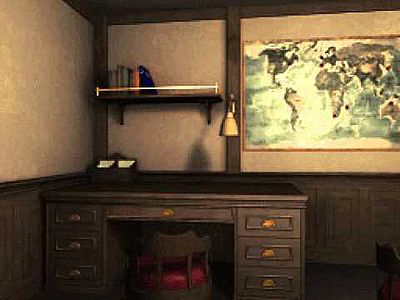 Nine Hours, Nine Persons, Nine Doors is a DS adventure that is as odd as it is intruiging. Although the amount of work it expects isn't totally compensated for by the unfolding story, there was enough of a soul to these proceedings to keep me coming back for more.

With a blend of adventure game mechanics and enough conspiracy theories to fill an entire X-Files series, Nine Hours, Nine Persons, Nine Doors for the DS is a curious mix of compelling fiction and one-off puzzle gameplay .

As Junpei -- a nondescript young male character -- the game plunges you into a deadly story onboard a crippled vessel stranded in the ocean. With only nine hours until the ship sinks you have to solve various puzzles in order to escape, all the time solving the wider mystery of why you're there and who your other companions really are.

Once you escape the initial room you're introduced to those characters and the evil host who put you in this predicament. Calling himself Zero, the man announces over the loudspeakers the rules of the Nonary game to the nine prisoners and from then on you start on your journey through the ship.

Despite being a DS game with its limited visuals I found myself becoming sucked into the disturbing world 999 created.

This initial burst of exposition is succinct enough and although it took close to 30 minutes before I could actually resume playing the game, the sense of atmosphere created during the info-dump was effective. Despite being a DS game with its limited visuals I found myself becoming sucked into the disturbing world 999 created.

Most of this is down to the excellent audio work. Wearing headphones allowed every creak and groan of the ancient vessel to come alive in my ears. It might sound odd that this would be so important, but with the gameplay so static I found that the subtle sound cues really supported the text.

As this came together 999 created a spooky atmosphere. The story had a surprising habit of veering from cute humour to graphic descriptions of violence and gore. It was a dichotomy that worked though, and effectively built tension and kept a sense of mortal dread around these characters.

This isn't a game that can be appreciated in one play through. With six possible endings you have to complete at least four to uncover a decent amount of narrative that explains what is going on. I loved this approach and the way you can take different paths through the ship and solve different puzzles with different people to uncover their back story. It built my relationship with the characters and deepened my curiosity in the many-layered plot that surrounded the whole experience.

Though the story is interesting and compelling enough for me to drag myself to all six endings, the information to make it so fascinating is awkwardly implemented.

Being a puzzle-based game this sense of atmosphere and drama can only carry the experience so far. And unfortunately the puzzles just don't allow that kind of replayability to be very enjoyable. Once I'd played through two endings the majority of the puzzles had been solved and I was forced to solve these again to reach the new material.

As the game has a button dedicated to skipping through text quickly it become irritating that a similar scheme wasn't employed to skip through the already-solved puzzles. Though these hidden object-style mysteries are interesting the first time they simply don't stand up to multiple play-throughs.

It isn't just this issue that drags 999 down from its interesting atmosphere. Though the story ultimately got me to play through all six endings, the information to make it so fascinating is awkwardly implemented.

Characters will suddenly pronounce about things that they happened to know - most of it being in the realm of pseudo-science and seemingly unrelated to their character. I'm the kind of guy who loves that sort of stuff but having one of these strangers interrupt a critical puzzle with a tale about Ice-9 or morphic resonance just came across as bizarre rather than a subtle aside.

It successfully manages to touch on the horror genre without becoming deliberately nasty and delivers a truly odd and incredible ending.

Because you can skip the text you've already read in previous play-throughs it made these blocks of conspiracy-laden information irrelevant until I'd sat back and thought about the game as a whole. It never seemed totally unbelievable, given the nature of your situation within the game, but things do get pretty balmy. In many ways it was like an esoteric version of the Saw survival games.

Even though the puzzles are tedious to repeat I was sufficiently curious to uncover the real story behind 999 to work through them. I couldn't help but play for hours at a time in the hope I'd make the right decisions and reveal some new nugget of back story or, more critically, remain alive.

Nine Hours, Nine Persons, Nine Doors has a confusing soul. Its disturbing descriptions of terrible violence and gore are transfixing, but its just as likely to descend into tedium with irritating character monologues. But somehow this confusing blend doesn't mean the game is a soulless husk like so many interactive novels can be. It successfully manages to touch on the horror genre without becoming deliberately nasty and delivers a truly odd and incredible ending.