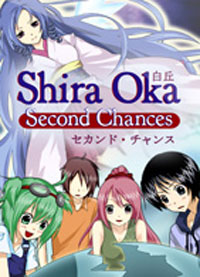 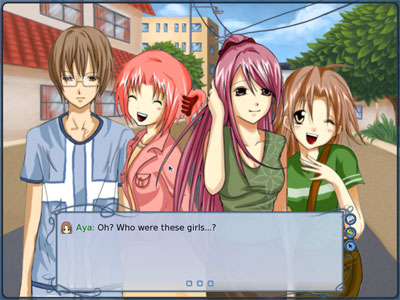 Shira Oka PC not only injects elements that keep the game fresh but it also breathes with innocent atmosphere and an obvious affection for Japan. With a dearth of role-playing statistics and dialogue paths it's a soulful dating game that I enjoyed immensely.

Not to be too self-indulgent but the setup for Shira Oka ensured that I was hooked right from the start. It begins with a twenty-something male reminiscing over his failed experiences at school, who by a stroke of angelic luck gets thrown back in time to right those wrongs.

Just like the main protagonist I was pretty bad at school. Low grades and even lower self-esteem meant all the 'cool' parts of being there happened to other people. I was far from the social drop-out of the main character in Shira Oka but the idea of going back, knowing what I do now, and rewriting my school days is very compelling.

Statistics-wise Shira Oka works on a number of levels that I won't get into here. What really caught my eye though, were the six levels that affected grades at school and general social interaction. These abilities only increase when you concentrate on doing the relevant study and to the detriment of all the other levels. So while my literature level went up after successfully studying all week, my sports, popularity and fashion-sense went down.

Though this could seem annoying it means I had to tactically choose what skills I wanted to increase and not just min/max the whole lot. This led to a unique experience each time I played through the game - and also made more videogame sense than becoming great in every aspect of my character's life.

So far you might be thinking what does a dating Sim offer other than pure escapism and fantasy. Well, these role-play elements certainly encourage more strategic thinking than just clicking on text bubbles and choosing which hot schoolgirl you're going to date. In fact, certain elements of Shira Oka were pretty close to Persona without the dungeon crawling crossed with Quantum Leap.

As ridiculous as that might sound that's actually a fitting description of a game that has much more to it than first appears. Sure, I did a lot of mindless clicking to get through conversations but if I wasn't careful I found myself dealing with a curve-ball.

A few stereotypes persist I was pleased to see such a range of topics and personalities portrayed.

Sometimes this would come in the form of extremely well-written dialogue that gave depth to the variety of girls you spend your time talking to and trying to woo. Some will be interested in school studies, others the paranormal, one is obsessed with inventing weird machines and another with cooking.

They all come across as unique individuals and although a few stereotypes persist I was pleased to see such a range of topics and personalities portrayed. All the way from downright annoying (Aya) to highly intriguing (Yui).

The bigger shock comes in the form of critical events. Some of these are fatal - either for you or other characters you interact with - others are more mundane like getting very bad grades. To suddenly find myself dead and taken back to the start of the game was a complete surprise. Rather than just pop up a game over screen, (which would be unfair as no warning is given when this event occurs) your guardian Angel, Satsuko, sends you back to the start of the school year to begin your task again.

At first I wasn't sure if this approach was going to work as repeating all the conversations I'd already had didn't strike me as particularly enthralling. But by retaining your experience points and streamlining the subsequent play through Shira Oka opened up that role-playing element which gave it extra depth and soul.

All these nuances and personality give Shira Oka a depth and a soul that many other dating Sims simply lack.

This approach was made even more 'interesting' by the school stats being reset as well. This almost became a deal breaker for me though as the thought of raising these numbers again and juggling which ones to concentrate on at the expense of others seemed like a lot of busy work.

Then I realised my problem. This isn't something you can rush through multiple times in order to see every ending - Shira Oka is actually an epic and lengthy journey that builds-in the ability for you to play it a variety of ways. I found myself exploring all dialogue options within the same play through until I was comfortable with what my final choice would be once I'd levelled up everything as high as I could.

This in many ways is the same manner with which you'd approach a Roguelike. And how fascinating it was to experience a dating Sim with those same tenets - albeit in a very different way.

This level of detail and personality gives Shira Oka a soul that many other dating Sims simply lack. The superior writing, due to its western development and not translated from original Japanese, also makes the minute to minute experience punchy and compelling. The combination of good writing, interesting role-play mechanics and cultural detail made this a most rewarding experience and one I'll keep returning to.

You can support Adam by buying Shira Oka