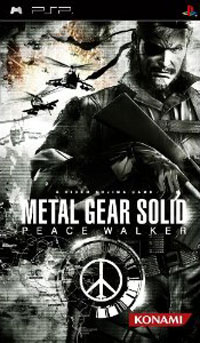 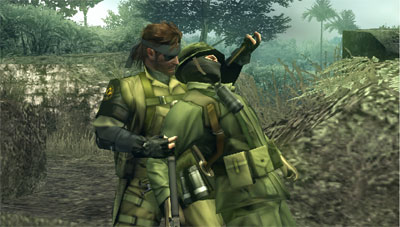 Metal Gear Peace Walker PSP takes the best aspects of the franchise, and not only provides satisfying stealth-action game play but also delivers a worthwhile story. Its understated approach made the narrative believable and grounded in some sense of realism, letting the emotional links to past Metal Gear games to provide the knockout blows.

Taking the next full Metal Gear game to the PSP after the PS3's dramatic Metal Gear Solid 4, felt a bit of a backward step at first. Getting a meaningful and immersive experience from a handheld tends to be hit and miss and the highly charged nature of Metal Gear didn't seem like a good fit. At first.

These preconceptions were rightfully blown away shortly after experiencing the game for myself and it's a further reminder that you don't need the latest hardware or particle effects to tell an effective story or create a soulful world.

Peace Walker succeeds in this regard due to several factors. Mostly down to choice of character and location but also due to how well the game has been designed around the PSP and not crammed into it.

Set in Costa Rica in late 1974, Peace Walker acts as a sequel to Metal Gear Solid 3 and sees you taking control of the original Snake or Big Boss. Though I have my own issues with MGS3 - namely its extraordinary rambling into the supernatural - both it and Peace Walker have a certain earthy believability because of their historical setting.

Having been tapped to flush out a mysterious CIA force that's established itself in the country, the story unfolds logically bringing the paranoia and terror regarding nuclear weapons to the fore. It brings historical events like the Cuban Missile Crisis and Metal Gear's own fiction together with more compelling game play than the self indulgent offering of Metal Gear Solid 4.

It can't hope to compete with the set-pieces of a major console release but the dramatic nature of the story is served far better with the way it's been designed for the PSP. Cut-scenes are delivered in the same style as the comic book series and this expressive nature portrays the characters in a much more human way than just awkward 3D models.

There's still a thin veil of emotional separation with the Metal Gear games because they always err on the side of fictional excess than reality.

It goes some way in making Snake, Miller and a host of other incidental cast members leap off the virtual page. I started to feel like an actual leader of men, with people counting on my efforts to save them. This and the crew management system means Peace Walker feel like the most complete Metal Gear you could play. It offers a depth of options when it comes to researching weapons, items and recruiting new soldiers - the game feels more like a management Sim than a combat experience at times.

None of this sacrifices the atmosphere of Peace Walker and it excels in portraying Snake in a new, yet familiar light. The guilt of killing his mentor in MGS3 visibly works away at him and made the dramatic flashbacks all the more meaningful to me considering how Snake Eater ended.

Out of all the Metal Gear fiction the build-up to MGS3's climatic conclusion remains a moving memory. The realisation that you had to kill the most charismatic character of the game was made all the more affecting by the visual nature of that moment.

It's the high point to a Metal Gear game that's mercifully free of the lecturing exposition in previous games and gives Peace Walker an austere quality I wasn't expecting.

It's the same feeling I got when witnessing the flashbacks in Peace Walker. The exaggerated art-style served only to embellish those moments and interacting with them brought back the same memories of Snake Eater's conclusion. It's the high point to a Metal Gear game that's mercifully free of the lecturing exposition in previous games and gives Peace Walker an austere quality I wasn't expecting.

That said, there are still moments where the hand of Kojima dives in and pulls back the curtain a little too much. The interaction with Paz, the 16 year-old you meet at the beginning of the game verges on inappropriate at times

I was disappointed by the lack of creativity when it came to the boss battles though. Previous Metal Gear games have had inventive or 4th wall-breaking moments when battling an end-level character. It also lacked characters like Liquid Ocelot, Vamp or Screaming Mantis. Kojima never really tried to get inside my head as he had in other games. Whether the setting was inappropriate for this or the limits of the PSP prevented it, Peace Walker remains a 'plough 14 machine guns into the chopper' kind of game.

This lack of soul is balanced by how eloquently it bridges the gap between MGS3, itself and the very first Metal Gear game.

This lack of soul is balanced by how eloquently it bridges the gap between MGS3, itself and the very first Metal Gear game. When you connect up the dots at the end of Peace Walker's campaign there's a nice path that links everything together, making this an understated yet essential part of the Metal Gear canon.

There's nothing else that comes close to delivering a meaningful and enjoyable experience on the PSP. The mix of decent narrative and engaging game play shows that Metal Gear can be subtle and understated, but still convey that inherent Metal Gear-ness that makes the franchise so unique.