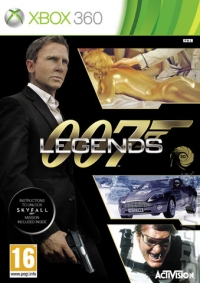 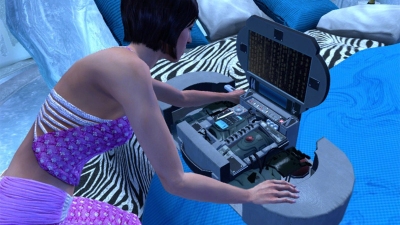 I liked Eurocom's reimagining of GoldenEye as a Daniel Craig vehicle. Sure, as a shooter it had modest ambitions, but it was solidly playable and very cleverly dragged the film's nineteen-nineties storyline into the twenty-teens, as well as into the tougher world of Craig's Bond.

007 Legends takes on a much larger updating job, that of cherry picking set pieces from five earlier Bond films and reworking them into the current Bond era, but approaches it in a far less ambitious, indeed cack-handed way.

The game kicks off with a cinematic - presumably adapted from a scene in Skyfall, although as I havent seen the film at the time of writing I'm not 100% sure - which leaves Bond in a very critical state, sinking into deadly waters.

Following a rather good Maurice Binder style title sequence, scored with a re-arranged version of the Goldfinger theme, the drowning Bond - Daniel Craig's face, but the voice of sound-a-like Timothy Watson - sees his life flashing before his eyes.

Precisely he sees sequences from five old Bond films, updated to feature Craig's Bond, and set in the twenty first century (presumably between Quantum of Solace and Skyfall).

The stories have also been reworked into a generic first person shooter, with some equally generic racing, stealth and QTE (simon says sequences where you tap a specific button on cue to progress through a pre-canned sequence) sections thrown in for the sake of variety.

On paper, this isn't a bad idea, with the potential to be a James Bond version of Arkham Asylum, cherry picking story elements from the long history of a character, combining them with a gameplay types that really put the player into an iconic character's shoes, to create a consistent vision tailored to the videogame medium.

007 Legends ransplants characters and situations from earlier decades and utterly different styles of Bond movie into the 21st century.

Well that didn't happen. With a bigger budget, or longer lead time, or maybe just a bit more care and attention, 007 Legends could have been that game, but the final product certainly isn't the Bond franchise's answer to Arkham Asylum, or if it is an answer then Eurocom didn't understand the question.

As this is a Storygamer review let's start with the way that 007 Legends has blended the old Bond stories into the 21st century world of Daniel Craig's Bond: very, very badly. The title sequence boasts that the game has a story by Bond movie writer Bruce Fierstein, but the end credits also say the script itself is by Rob Matthews, presumably a dedicated games writer. Neither emerges with much to be proud of.

Rather than taking the approach they did with GoldenEye, that of totally recasting and reinventing the characters from an earlier era to fit with the Daniel Craig post-Bourne aesthetic, with 007 Legends Eurocom have just transplanted characters and situations from earlier decades and utterly different styles of Bond movie into the 21st century, then given them mobile phones and flatscreen TVs to try and cover up the disparity.

The first film to get the update treatment is Goldfinger. Exploring Goldfinger's base, the factory has been given the obligatory 'everything works like an iPhone' tech upgrade of the recent Bond movies, with big touchscreens everywhere. Judi Dench and Rory Kinnear are on the line as M and Tanner to pass on tips and instructions.

So far, so fitting. The aesthetic of the architecture is a bit more Ken Adam, a bit more stylised than you might expect from a contemporary film, but not too jarring.

Then you meet Pussy Galore, and she's 60s era Honor Blackman, complete with 60s era leather gear handed down from Cathy Gale. An 87 year old actress, digitally preserved as her much younger self, talking to Daniel Craig who looks... well, exactly as he does now, albeit in rubbery videogame form.

It's a jarring bit of gaming time travel. This version of Pussy Galore is pure 60s, and just doesn't belong in the same scene as a 21st century Bond. It's downright weird, a feeling emphasised by the fact that Galore isn't voiced by Blackman any more than Bond is by the real Craig - she's played by Natasha Little, an actress still most famous for playing Rachel in This Life.

The script is an equally muddy compromise between old and new.

Now Eurocom could have done what they did with GoldenEye here, and let Little interpret the character her way, using her likeness. There are certainly ways of reinventing the Pussy Galore character in a more knowing way suitable for modern audiences. But that's not what they've done - instead, we get something that's not quite impersonation, but not quite original performance either.

A similar thing happens with Auric Goldfinger and his sidekick Oddjob. Now, their tailored suits were hardly contemporary fashion when the movie of Goldfinger came out in 1964, but they did fit in with the more stylised world of the Connery Bonds. Put up against Craig's Bond, they don't fit.

Neither do the little old-Bond touches throughout the story. Bond may find Goldfinger's secret model of Fort Knox using his ubiquitous iPhone - and more on that thing later - but the existence of the model at all, hidden within a flip-top billiard table, is pure 60s spy-fi.

The script is an equally muddy compromise between old and new. The vintage characters throw out classic old-style bon mots, delivered in a clipped and dated fashion, while the modern, matter-of-fact approach of Craig's Bond is expressed in banal, blunt lines of dialogue.

The most notorious example, quoted in numerous reviews already (but that isn't going to stop me doing it too), is this timeless exchange:

Not even Bond, James Bond. Bond goes on to further demonstrate his silver tongue with the timeless Bondian line to Pussy, 'what are you up to with Goldfinger?'

If Goldfinger wasn't odd enough, On Her Majesty's Secret Service is even stranger. The sight of a hoodied Daniel Craig romancing a timelocked Diana Rigg, who is voiced by Spooks/Chalk actress Nicola Walker, is utterly bizarre, and to sandwich a rerun of the Bond/Tracy relationship between the Craig films just doesn't make any sense.

On Her Majesty's Secret Service is about a Bond who has been around for a while, and we know well enough for his decision to marry and leave his career behind is monumental and interesting. Craig's Bond has had two movie adventures that ran into each other and arguably form one story. He's not at the same place at all.

So much of this aesthetic oddness would be excusable if the game made you feel like a super-secret-agent, of course, but 007 Legends falls flat in this department as well. There's a certain logic to combining stealth and shooting when playing the world's most famous spy, but this means that for several sections my best bet was to run around a warehouse crouched behind boxes, sneaking up behind guards to shoot them in the bottom with my silenced Walther PPK.

It's fiddly and a bit tedious, which sums up much of 007 Legends gameplay.

This did not feel particularly heroic or Bondian. Neither did breaking into Goldfinger's office and stealing his mobile phone, especially as it appeared to be a rather cheap Nokia - not a phone appropriate to a man obsessed with bling.

This version of Bond, as anyone who played the aforementioned GoldenEye will know, is obsessed with his own mobile phone, a gadgeted-up iPhone. What was a cute contemporary twist on the Bond gadgets in that game is ridiculously over-used in 007 Legends, with long sections where Bond is looking at everything through his camera phone: tracking nerve gas, searching for fingerprints, and hacking electrical devices.

Certainly, spending most of his time faffing around with his phone when he's supposed to be working fits with Bond's role as a public servant in the 21st century - Activision missed some cross-promotional action not showing Bond playing Cut The Rope (or whatever) during one of M's duller briefings - but it doesn't feel very dynamic wandering around staring through a phone at everything.

It's fiddly and a bit tedious, which sums up much of 007 Legends gameplay - difficulty comes not from reasonable challenge, but from the fiddliness of some of the tasks required. Sub-games like the occasional melee combat are clumsily implemented and feel more like a kebab shop brawl than Hollywood action. Skiing is a teeth-grinding exercise in tree-dodging tedium.

I could go on. Even the surface details of 007 Legends are not up to snuff: character models are detailed but have a mannequin-like quality, while even good voice actors give semi-conscious, flat vocal performances. Even the menus and HUD are a step down from the clean presentation of GoldenEye.

It made me feel like a man playing an ill-conceived stealth-shooter hybrid.

In the end, and appropriately enough considering the low quality of the source film, it was Licence to Kill that finished me off - getting repeatedly mauled by drug runners in tacky 80s leather jackets didn't make me feel like James Bond, one of the greatest action heroes in our culture. It made me feel like a man playing an ill-conceived stealth-shooter hybrid.

Which is exactly what I was.

You can support Mark by buying 007 Legends