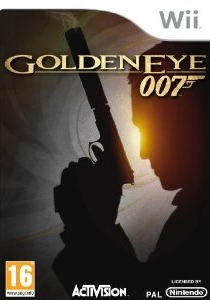 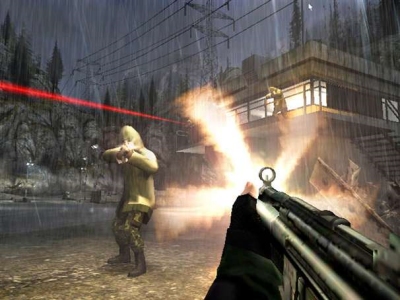 GoldenEye 007 Wii updates Pierce Brosnan's debut cinematic adventure as a game starring Daniel Craig. The result is not only a fun FPS for the Wii, but also a fascinating new take on the movie's storyline.

GoldenEye is a great Bond movie. You've probably seen it, and I'm going to presume you already have and talk about the plot in detail. If you haven't, and want to avoid spoilers (although, this being a Bond movie, the twists are not that surprising) there's a link to buy the DVD on the right.

The first three of Pierce Brosnan's Bond movies take place in a very specific period in international relations, the decade between the fall of the Soviet Union and the terrorist attacks of 11 September 2001.

These films are set against a backdrop of almost universal international cooperation, where Russian generals conduct joint operations with the British Navy and MI6, and where Bond himself can team-up with an agent of the Chinese intelligence agency.

The GoldenEye movie is particularly steeped in the spirit of the period, presenting a case for Bond in a post-Cold War world where the Russians are allies and the old communist statues are consigned to cluttered scrapyards. It's also a really fun film, with outrageously over the top action as Bond bounces from one comic-book set piece to the next.

As I said: highly recommended, link on the right.

This new game has a big challenge on its hands, then, in updating GoldenEye's story to the very different world of 2010 and the harsher, more serious Bond played by Daniel Craig in Casino Royale and The Quantum of Solace.

It's a testament to the robustness of GoldenEye's underlying story and characters that this update works very well.

It's a testament to the robustness of GoldenEye's underlying story and characters that this update works very well. The post-Glasnost optimism and flippancy are gone, replaced with a grey, bleak world and brutal hand-to-hand takedowns. But underneath the substance remains the same.

And there's a surprising amount of substance. The process of translation shows that GoldenEye has the strongest story of any non-Fleming Bond movie, with a compelling villain in rogue-00-agent Alec Trevelyan, a vision of Bond-gone-bad. It even has a great pair of good and bad Bond girls in Natalya, the spunky and plot-important computer programmer and Xenia Onatopp, the over-sexed and sadistic assassin.

Then there's the memorable set pieces and locations - the leap from the Arkhangelsk dam, the stolen helicopter, the snowbound research station, the tank chase, the cradle of a hidden transmitter dish - all tied together by the over-arching threat of the GoldenEye satellite, capable of knocking out any electronic system with an electromagnetic pulse.

Around these core elements, the new game changes virtually everything. Zukovsky, who provides Bond with information on Trevelyan's Janus Group, is now a contemporary Russian gangster with copious gang tatoos rather than an avuncular Robbie Coltrane. Locations have been changed, with the story now ranging from an arms fair in Dubai to a final battle in Nigeria, although the Russian locations remain the same.

There are also a scattering of contemporary references, with Trevelyan motivated by the recent financial crisis and the influence of bankers rather than the fate of the Liensk Cossacks.

Then there's the influence of the new Bond template set by Craig's debut in Casino Royale: a minimal use of gadgets (here reduced to a smartphone with hacking capabilities), an increased amount of physical action, and a certain seriousness of tone. That tonal change is reflected throughout: the tank chase, in the film a larky sequence of near-slapstick carnage, is now a more serious battle with helicopters and gun emplacements.

But underneath the post-9/11 frown, this is still a James Bond game.

But underneath the post-9/11 frown, this is still a James Bond game, and the emphasis is on fluid action, of being a highly skilled agent chewing his way through waves of hapless enemies. Bond's Walther P99 feels just right, especially with silencer attached, and whole areas can be cleared with stealth and silenced headshots. Night vision sniper rifles and hacked gun turrets provide similarly sneaky methods of attack. It's not the deepest shooter, but it's great fun.

Although Craigified, all the highlights of the film are here to enjoy, expanded into sprawling levels. While some levels feel constrained by the Wii hardware - Zukovsky's Barcelona nightclub feels particularly confined, with the city little more than an occasionally glimpsed skybox - others feel surprisingly expansive and atmospheric.

Severnaya, for instance, is a great location, a freezing waste surrounding a research station ravaged by an EMP blast, while the Memorial Park is a maze filled with all the Soviet statuary you could wish for. They're suitably dramatic venues for a shooter, and highly cinematic.

With one eye (golden or otherwise) on the Wii's broad user base (and the vagaries of Wiimote control) players can pick a wide range of difficulty options or control schemes. On the easiest setting, for instance, the autoaim could only be more obliging if it brought you the occasional cup of tea and a biscuit while you played the game.

This is a game that even a Bond fan who only occasionally plays games can enjoy. It may not be the most hardcore shooter, but by Wii standards its surprisingly robust, and even on the easiest setting there are still challenging segments, such as a frantically annoying section where Bond needs to defend Natalya from hordes of enemies.

It's hard to imagine any non-Fleming Bond plot being worth this kind of update.

GoldenEye 007 is certainly the most enjoyable shooter I've played on the Wii, and my favourite release on the system from 2010. It's a fun, unpretentious shooter, not at the cutting edge of the genre but not insultingly stripped-down either.

It's especially recommended for Bond film fans, for its creative reinvention of the GoldenEye story, which shows how strong that narrative was in the first place.

It's certainly hard to imagine any other non-Fleming Bond plot being worth this kind of update, but I would love to see one of the Connerys get a similar treatment: a Daniel Craig-led Doctor No game set in modern Jamaica, perhaps? Get to it, Activision.

You can support Mark by buying GoldenEye 007