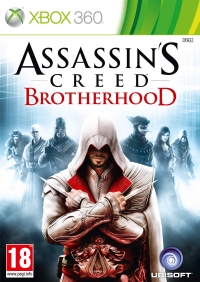 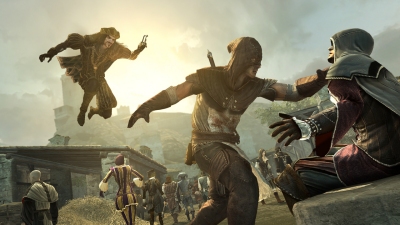 I absolutely adored Assassin's Creed 2, Ubisoft's free-running historical blockbuster. Whereas the first Creed had offered a medieval Holy Land that was full of local colour but light on meaningful interaction, the sequel's renaissance Italy was chock-full of side quests and optional missions to maintain interest.

There were old school platform levels to explore in the form of Assassin's Tombs, treasures and feathers to collect, freelance assassination contracts to undertake, and a home town to maintain - as readers of my Assassin's Creed 2 review may well remember. Aside from the home town of Monteriggioni and some suitably picturesque countryside, the famously beautiful cities of Florence and Venice were brought breath-takingly to life.

Assassin's Creed: Brotherhood, recently re-released as a budget title, narrows the focus down to a single city, but to be honest that doesn't feel like a reduction at all as the city in question is Rome, a place packed with quite enough intrigue and history to warrant a game of its own.

It takes a while for Rome to unveil its true scale.

Picking up straight after the previous game's climactic papal punch-up, Brotherhood initially feels a little constrained as Ezio flees Rome and winds up back in a more constrained version of Monteriggioni, with most of the exploreable areas there closed off. One tragedy later and Ezio is heading back to Rome, stripped of much of his gear and a desire to take vengeance against Rodrigo Borgia's son Cesare.

It takes a while for Rome to unveil its true scale. In typical Assassin's Creed fashion, shimmering holographic walls block off 'memories' you haven't reached yet, gradually opening up the city as key story missions are completed.

In another series tradition, viewpoints have to be scaled to fill out the game's map - but this is where Brotherhood's first innovation comes in, as some of the towers that act as viewpoints are occupied by Borgia forces. While you can still scale the tower to take in the sights and add to the map, the potential of any given area of Rome won't be unlocked until the Captain in charge of the Borgia tower is assassinated and the top of the tower destroyed.

Take out the Captain, blow up his tower, and various options open up in the liberated area. Vacant stables, shops and other buildings can be bought and refurbished, reviving the local economy and providing vital assets. Ubisoft have slyly taken the sub-game of reviving the despondent town of Monteriggioni from the previous game and rolled it out across Italy's capital city, knitting it into the very fabric of the gameplay and story.

Whereas the locations in previous Assassin's Creed games were pretty backdrops against which assassination missions and other stories were played out, in Brotherhood the city is the story, the conflict between Ezio and Cesare played out across the map as you reclaim territory from the Borgias then bring that area back to life.

Brotherhood isn't just a sub-title, it actually means something in the context of the game's story.

Restoring the city opens up further possibilities. Vacant houses can be converted for the use of the series three factions of useful NPCs, the courtesans, thieves and mercenaries. Shops can be used to trade goods taken from the bodies of enemies and retrieved from treasure chests, with 'shop quests' providing special rewards for certain combinations of trade goods. Aqueducts can be restored to use, opening up new routes through the city, as can access tunnels.

Meanwhile every shop or site purchased adds to your income, paid into a bank account for every twenty minutes of playtime. Money that can be used to pay for restoring more shops and sites... and so on, in an addictive cycle. Mid-way through the game a further dynamic is introduced as Ezio begins to recruit trainee assassins who can be deployed either in-game as smart bombs or sent on missions to other cities in a sort of Assassinship Manager 1499 resource management sub-game.

"Brotherhood" isn't just a cool-sounding sub-title, or a nod to the game's Spy Vs Spy like multiplayer mode, it actually means something in the context of the game's story, as Ezio's recruitment drive transitions the Assassins from being a small group of borderline superheroes to a wider family of ordinary citizens fighting the Borgias. That sense of nurturing your murderous sidekicks is another case of the Assassin's Creed series being surprisingly warm for a franchise based around stabbing people in the neck.

Taking from history but embellishing wildly, Brotherhood's core cast is, of course, about as good as supporting characters in games get: what other game can boast Leonardo da Vinci and Machiavelli as back-up for the player, and an actual Pope as the villain? Leonardo is particularly charming, a genius who has a slightly puppyish and shy affection for the oblivious Ezio.

Taking from history but embellishing wildly, Brotherhood's cast is good.

It's not all amiable kinship within the order of assassins: there are tensions and suspicions as the game proceeds, and conflict within Ezio's own family as his sister Claudia becomes more involved with one of the factions than Ezio considers appropriate. There are also conflicts within the Borgia camp: while Rodrigo was a ruthless opponent, Cesare is repellently evil, with a more hands-on approach to cruelty - and his sister.

Such vivid characterisation and machinations within the two camps helps to disguise the fact that, compared to its two predecessors, Brotherhood is primarily a simple revenge narrative. Get Cesare, if you like. The conspiratorial, supernatural basis of the Assassin's Creed series' plot may be hokum, but in terms of scripting, acting and cut-scene quality Brotherhood is absolute top-notch.

It's on the streets of Rome, and in the sprawling diversions it presents that the story expands. While Ezio as a character doesn't develop much this time around, Brotherhood continues to push at the edges of the fictional universe of Assassin's Creed, expanding the historical and geographical reach of the series.

There's the Cult of Romulus, wolfskin-wearing fanatics living in underground lairs, connecting the renaissance-era narrative to the days of the Roman Empire. The Cult's history unfolds through scrolls located at the heart of each lair (the equivalent of the previous game's assassins' tombs), adding a further layer to the already complex pseudo-history of the series.

There's also plenty of mythology doled out in the missions Ezio sends his new recruits out on, with text descriptions of each mission weaving the actions of the assassin into the history of the time across Europe.

Seeing the same locations in both past and present does add to the scale of the story.

While mostly sticking to Rome, Ezio does get to occasionally depart the city himself, and while these travels do broaden the scope of the game, they're not entirely successful. The sub-missions to destroy weapons built by Leonardo provide a theoretically fun opportunity to test-drive the ahead-of-his-time inventions from Leonardo's sketches, but vehicle sections aren't really this game's forte and driving a wooden tank isn't as much fun as it sounds.

Ezio's pursuit of Cesare on to the fields of battle - seen in a flash forward at the start of the game - is also a little underwhelming. It's necessary to fit within something resembling history but, as with the stealth sections of the Leonardo levels, single-purpose areas are a lot less fun than the busy complexity of the main map.

One area of the series' story that continues its steady improvement are the near future scenes with Desmond, Ezio's descendant, and the over-arching plot of the conflict between assassins and Templars coming to a head in the modern world. Since picking up Ezio's abilities last time around, Desmond gets to go out and about a bit more, rather charmingly traversing a modern-day version of Monteriggioni.

There are other excursions, with the ghosts of the past bleeding through into Desmond's perceptions. While these future sequences are mainly a narrative justification for the history-based gameplay, seeing the same locations in both past and present does add to the scale of the story.

The sense of exploratory freedom presented by parkour-ing around the past remains as strong as ever.

A further perspective is added by the multiplayer, which justifies its quick rounds of player vs player assassinations by casting the players as recruits for series baddies Abstergo, training within ranks of animus machines in preparation for battles to come.

While initially seeming to be a cheap quickie sequel, coming only a year after Assassin's Creed 2, Brotherhood proves to be the best of the bunch to date. The sense of exploratory freedom presented by parkour-ing around the past remains as strong as ever, and the expanded range of activities and side-missions presented by Brotherhood makes for an even more lavish blockbuster game. If you didn't pick it up on it's initial release, make sure not to miss it this time around.

You can support Mark by buying Assassins Creed Brotherhood