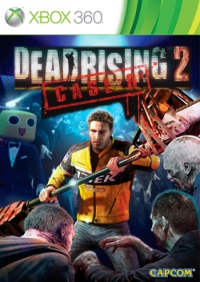 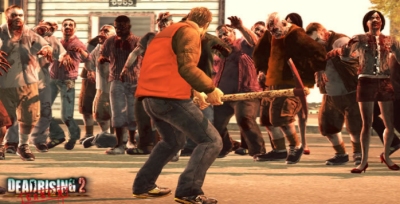 Dead Rising 2: Case Zero 360 is a self-contained downloadable prologue to the forthcoming sequel that expands the story and zombified universe of the series.

Don't call it a demo. Dead Rising 2: Case Zero is standalone, but while it acts as an introduction to that game's lead character, story and game play, it's set in a different location with its own characters and missions.

Essentially, its a mini-Dead Rising, not a disconnected chunk of game play but a whole story with a beginning, middle and an end. The unique structure of Dead Rising is here, complete with the need to have multiple play-throughs to level up and explore all the options.

There's some advantages to Case Zero's small scale: players intimidated by the idea of playing a game as sprawling as Dead Rising again and again will find Case Zero's small desert town much more manageable. Play-throughs are quick, with a day of game time passing in a couple of hours, so it feels less of a time sink. There's a lot of content here for the price, and most players should get through virtually all of it.

In terms of story, Case Zero follows on from Dead Rising's standard zombie outbreak scenario and widens it into something more interesting: since the Williamette Mall incident the zombies are an accepted fact of life, and zombie infection is an illness manageable with regular injections of the ruinously expensive drug Zombrex.

Where the tone of the series has changed is in the choice of protagonist.

The game opens with motocross star Chuck Greene and his daughter Katey arriving in the small town of Still Creek, having fled an outbreak in Vegas. Katey is suffering from a zombie bite and needs regular Zombrex injections, so when Chuck's truck is stolen with the precious Zombrex on the dash, it's bad news, especially as the town is overrun with zombies already. Chuck has 12 hours to find some Zombrex and some new wheels so he and Katey can get out of Still Creek.

Having played the original Dead Rising I was on familiar ground - explore an open (albeit in this case relatively small) world, kill zombies, complete various missions, all under a great deal of time pressure. Non-player characters are still either prissy quest-dispensers or psychotic boss baddies, and the cartoon violence has been expanded with the option to build grotesque weapons from everyday objects - paddlesaw, anyone?

Where the tone of the series has changed is in the choice of protagonist. As I said in my review, Dead Rising's Frank West is one of gaming's great jerks, a pug-faced loudmouth who is only interested in getting a good story to advance his journalistic career.

Chuck Greene is more straightforwardly heroic, with a cool career as an All-American sporting hero and sympathetic motivations as a concerned dad. There's no ironic edge to Chuck's character at all, with the cheesy father/daughter cut-scenes played dead straight, but I found myself warming to the grimacing lunk anyway. In a world gone mad, there's no harm in having your hero be the oasis of normalcy at the centre of the storm..

Although it's ending leads into Dead Rising 2, Case Zero feels pleasingly self-contained: it's a small, perfectly formed, and cheaply priced game with its own story and merits. Not only did it leave me eager to play Dead Rising 2, it left me hopeful that other big name game series might deliver shorter, downloadable instalments, especially if they're as polished as this.

You can support Mark by buying Dead Rising 2 Case Zero