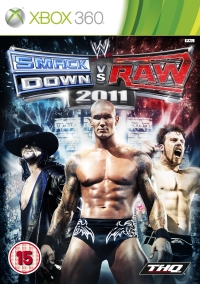 WWE Smackdown Vs Raw 2011 360 features a plethora of customisation and gameplay options for wrestling fans, but all those menus and variables can't distract from a game that's lacking in any real atmosphere or excitement.

WSVR (as I'll call it from now on... pronounced 'wizver', if you were wondering) certainly puts a lot of effort into replicating the trappings of a WWE TV show, with elaborate, presumably motion captured intros for each wrestler as they enter the ring, and a host of signature moves and taunts for each character. There's commentary, on-screen logos, and the sort of wide-angled view of the ring you would expect from watching matches on the television.

While these flourishes add authenticity, they're also distancing: WSVR feels more like watching the action from afar than getting involved, the on-screen wrestler more of a doll to be prodded around the ring than an avatar for the player.

A general stiffness to proceedings doesn't help. While individual moves are well-animated, they don't flow into each other well and characters are rigid, unnatural things that slide across surfaces rather than walk, and for all the lifelike detail have a plasticky sheen.

There's an equal lack of engagement in the controls, with little sensation that you're, well, grappling with a physical challenger. Instead it's a simple matter of button presses and the odd stick twist to toss opponents into the ropes, slam them into the canvas, pin them and so forth.

These backstage sections are incredibly perfunctory.

The game itself has no intro movie, a simple semi-animated title screen leading to the tutorial ring and the aforementioned long, long menus. This being Story Gamer I concentrated on Road to Wrestlemania, which seemed the most promising game option in terms of narrative - take a wrestler through an entire season of bouts, leading to a face-off with the infamous Undertaker at Wrestlemania.

Road to... clearly wants to be open and adventurous, giving players insights into backstage conflicts, and providing a sense of an over-arching career. Unfortunately it's way too cheap and stunted - regardless of which city you're supposed to be fighting in the initial animation of driving up to the stadium and the explorable backstage area are identical, serving up no variety or sense of progress.

These backstage sections are incredibly perfunctory: wander around a small area, go to the doctor to upgrade your skills, exchange some wooden dialogue with other WWE stars, and occasionally engage in an off-stage grudge match to earn extra XP.

As the Undertaker plot line develops there are some trippy variations with smoking coffins, soul-collecting urns, and an arena full of wrestling druids, but while fun they're shoddily executed, and nowhere near up to the standard of, say, the fourth-wall breaking tricks of Arkham Asylum's Scarecrow levels.

Rather than hype and drama most bouts devolve into groggy wrestlers stumbling around the ring.

In or out of the ring, and regardless of the game mode being played, for a game based on this famously flashy and excitable 'sports entertainment' WSVR is severely lacking in showbiz energy. It's a functional brawler which doesn't really sell the excitement that millions of fans obviously get from watching WWE. Rather than hype and drama most bouts devolve into a tiresome trudge of repetitive commentary and repetitive gameplay as increasingly groggy wrestlers stumble around the ring.

There are plenty of hardcore WWE fans for whom the stories and characters in the game will need no introduction or justification, just an authentic portrayal, and those fans may very well lap up WSVR with its detailed recreation of their favourite wrestlers' signature moves and taunts. This game is for those fans, and they're welcome to it.

You can support Mark by buying WWE Smackdown Vs Raw 2011