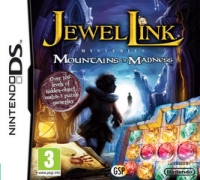 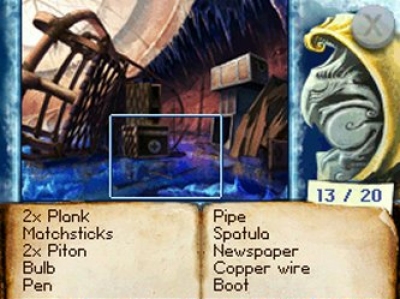 Jewel Link Mysteries: Mountains of Madness DS is an odd combination of eldritch horror and puzzle game, but one that proves to be oddly addictive.

It's Valentine's Day, a day for love, or even better Lovecraft.

HP Lovecraft's novel At The Mountains Of Madness is, compared to his more abstract horror stories, rich narrative source material for a videogame. There's the hostile environment of Antartica, the mysterious, ancient city in the mountains, and the threat of the entities that once dwelt in the city- and the guardian they left behind.

There's plenty of potential for an action or survival horror game there, but Mountains of Madness is neither: instead, it's a low-fi adventure combining static artwork with some simple puzzling.

The story has been heavily tweaked for the game, with the player taking on the role of a new character, Lynn Morgan - an oddity in Lovecraft's world of twitchy male academics. Professor William Dyer is still the leader of the 1931 expedition that discovers the Mountains of Madness, but although the rough progression of the story is similar the whole tone of the piece has been considerably softened, as you might expect from a game rated as suitable for ages 3 and over.

As with the likes of Hidden Mysteries: Titanic, Mountains of Madness renders the potential horror of frozen bodies and decaying Elder Things completely innocuous with its 90s, VGA-style graphics. However, some atmospheric sound effects and the natural emptiness of the landscapes make the static game art more acceptable than it would in a more lively setting.

There are three basic game modes which, barring the inclusion of a simple jigsaw game when a new page from the Necronomicon is found, are rigidly progressed through in order for each level.

First comes a hidden object round, which may explain why the Shoggoth is so determined to destroy the humans - for an archeological expedition they somehow manage to litter every space they enter with a tremendous amount of junk that the player needs to sift through. Infuriating if you've been left to keep an entire city clean by yourself. Poor Shoggoth.

Anyway, I'm not a big fan of the hidden object genre, but these at least look nice, and are incredibly easy to complete - tap around the area like a demented woodpecker, then search out the few objects you didn't manage to hit already.

The game tones down the horror of the story to the point of non-existence.

Second round is object combination, taking items found in the previous round and using them to unearth gems hidden around a new environment. This stage is incredibly easy, with pop-up clues and twinkly hot-spots taking away any possible challenge.

If the previous rounds have involved putting together a necronomicon page, then there's a simple jigsaw game that occurs after the second round to reveal a power-up usable in the final round. I always thought the necronomicon had scarier contents than pictures of cartoon axes and stars, but there you go.

The final stage of each level is the core of the game, a gem-switching colour match game, where matching colours is used to clear the tiles beneath. It's a very familiar formula, but it is a very well-executed example of the form. The puzzles start out easy enough, but build in complexity to the point where it can take a good dozen attempts to complete each one.

They're fiendishly addictive little challenges, and I was surprised to find myself increasingly hooked on Mountains of Madness. The whole gameplay loop becomes strangely hypnotic, with the mind-numbing busywork of clicking through story scenes, finding objects, combining them and so forth providing mental breathing room before taking on another colour-matching problem.

Even with this enjoyable puzzling core, Mountains of Madness is a slim, short game. Does it do Lovecraft's story justice? Not really. The game tones down the horror of the story to the point of non-existence, and there's certainly none of Lovecraft's sense of cosmic unease, beyond a vague eerieness and some spooky sound effects.

We're used to seeing every available narrative mangled into an action-packed shooting gallery.

Is turning At the Mountains of Madness into a puzzle game any more jarring than turning it into a first person shooter or other action game? Probably not, it just feels that way because we're used to seeing every available narrative mangled into an action-packed shooting gallery. At least this game keeps the monsters lurking at the edge of the story as a sinister threat, rather than over-using them as cannon fodder.

Jewel Link Mysteries: Mountains of Madness isn't a great game by any stretch of the imagination, but it's a strangely compulsive timewaster. For Cthulhu's sake don't buy it at full-price, but as a bargain-bin purchase it would idly pass a dull train journey. I'm not sure that's what Lovecraft had in mind when he wrote his novel, but it'll do.