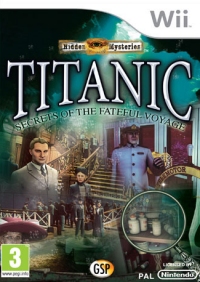 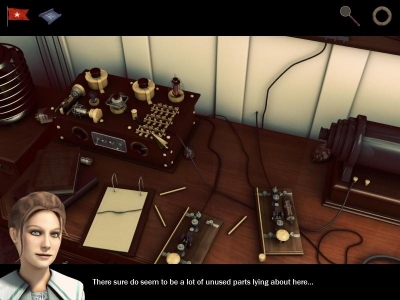 Hidden Mysteries: Titanic Wii uses a real life disaster as the basis for a dull story that provides the sparse framework for mediocre puzzles. Flat, cheap presentation and a short play time round out an unappetising package.

Now, I'm hardly a graphics snob: if I were, I'd consider Another Code R (Wii) one of the best games I've reviewed this year, and Deadly Premonition (360) one of the worst, and that clearly isn't the case.

I'm entirely amenable to a game that doesn't use the full graphical clout of a console, providing it makes up for that with good gameplay, or a great story, or a unique aesthetic style which transcends its budget.

With all that in mind, games like Hidden Mysteries: Titanic (subtitled Secrets of the Fateful Voyage) do push their luck, especially as a boxed, shop shelf product. Even at a budget price, it's an eyebrow-raisingly dated and small-scale game.

Aside from animated cutscenes and occasional 3D minigame, none of which are spectacularly executed, Hidden Mysteries: Titanic would be perfectly at home on a PC in the mid-1990s, consisting of a series of static locations and characters, interacted with by pointing and clicking on shimmery hot-spots.

There's the odd bit of animation - steam from an opened valve, for instance - but mostly the player is looking at a series of pretty-ish, airbrushed pictures. They're quite detailed, not unpleasant pictures, but lacking in any artistic spark to make up for the fact that you're staring at a still image for minutes on end.

There's a fully recorded dialogue track with some OK acting, and the music is atmospheric enough.

On the plus side, there's a fully recorded dialogue track with some OK acting (although there are plenty of goofs - a character who pronounces the 't' in 'valet', for instance), and the music is atmospheric enough.

Although based on a real-life tragedy, it's hard to describe this game as in poor taste, not just because the sinking of the Titanic was almost a century ago, but because the game is too bland to really offend.

The insipid story sees the player guide Lady Margaret Ashley, working class girl turned good, who has to negotiate the class divisions of the doomed luxury liner as she deals with her toff husband in First Class and belligerent mother down in Steerage.

There's also a series of hidden tunnels to explore, and some nonsense about an Egyptian mummy. It's all very tame, with no real tension or horror even as the ship is sinking. We're told that many, many people died, but the game refuses to engage with this fact. That the game is PEGI rated as suitable for 3 year olds is an indication of the anodyne approach it takes to a real life tragedy in which real people suffered and died.

Regardless of the supposed plot and its adherence to real events, what the player gets is a series of levels, each rigidly confined to a map of four or five locations, in which Lady Ashley has to solve some basic problem - retrieve a stolen boarding pass, obtain some medicine, find a door - through the most arcane and pointless means possible.

Motivation is the void at the heart of this game.

Yes, this is 'classic' graphic adventure problem solving, where you have a number of objects and have to work out how an egg whisk, a peacock feather, some salt, and a broken watch can help you get past the guard.

That's not a real puzzle in the game, but there are plenty in-game which are almost as dumb. Putting crumbs on an old coat so it will be savaged by seagulls, allowing Lady Ashley to pass as a poor person, is one particularly daft example (and also an indication of the almost comic treatment of class divisions in the game).

Motivation is the void at the heart of this game, a lack even greater than that of any discernable productions values: Lady Ashley does stuff because it's the only thing that can be done with the hot-spots and objects available in a level, not because she's expressed any objective that these actions might fulfil.

The first level aboard the Titanic (after a dock-side tutorial) is particularly baffling - Lady Ashley is left to her own devices, with nothing to do and no notable intent.

What you end up doing, because it's all you can do, is find a series of objects and put them together in a way that opens a hidden door, at which point our inscrutable lead character goes through with it. We're never told this is an objective, it just sort of happens.

In other levels, reasons are given but they hardly justify the efforts, and level of carnage, Lady Ashley applies to solving them: aside from stealing everything in sight (providing it shimmers), she just can't seem to help taking the most destructive path to her objective, merrily smashing up cargo crates and injuring people to get her way.

If she's trying to maintain the veneer of an upper class lady, which the dialogue insists she is, Lady Ashley is going a funny way about it.

She just can't seem to help taking the most destructive path to her objective, merrily smashing up cargo crates and injuring people to get her way.

It all adds up to a very unsatisfying game. Even leaving aside the lack of aesthetic appeal, the puzzles are the worst kind of nonsense, simplistic due to the constrained nature of each level but tricky due to the sheer lack of any logical basis to the solutions. Thankfully the single-screen puzzle sections are skippable, but that just cuts down the game's short playtime even further.

For variety, some puzzles involve using the Wii-mote in a specific way to manipulate an object, and there are also single-screen hidden object games where Lady Ashley has to find ten of a certain item.

It's perhaps the most damning thing I could say about Hidden Mysteries: Titanic that the hidden object sections are amongst the most fun in the game: at least the objects are sensible items that fits the environments, rather than mysterious puppy reflections.

Apart from the odd little spark of interest, there's very little mentally taxing fun here, just a frustrating process of trial and error that won't slow you down enough to sustain the game beyond a few short hours of play. A voyage to avoid.

You can support Mark by buying Hidden Mysteries: Titanic