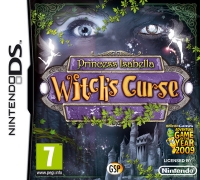 Princess Isabella: Witch's Curse DS is one of the more playable entries in the bloated sub-genre of simplistic DS adventure games, but its bland presentation sits uncomfortably between twee fairytale and gothic fantasy.

In terms of gameplay, Witch's Curse isn't too dissimilar to Women's Murder Club on the DS or, over on the Wii, Hidden Mysteries Titanic a series of largely static, detailed locations containing a mix of simple puzzles, generic mini-games, and hidden object searches that look like someone's accidentally overlayed four hundred pieces of clip art in photoshop.

As Princess Isabella works to free her castle from the titular curse, it's clear that this is one of the more elaborate examples of this odd sub-genre, with collectable objects and the puzzles which require their use spread all across the map, creating a more complex whole where detailed exploration and thinking is required.

There are also some surprisingly complex mechanics: a range of different powers to acquire, some of which are applied in (admittedly basic) action/shooting sections where a threat needs to be tapped with the stylus. Little nuances like a map which allows you to fast travel to any opened location, or the journal entries Isabella finds around the castle, add to the feeling of a well-thought through game.

It's a shame that these puzzles aren't linked by a strong narrative, characters or setting.

It's certainly compulsive, with puzzles and hidden object searches revealing items that you know can be used in a previous room, and it's hard to not keep following the chain of logic until you hit a brick wall. In my case it was a bug in the game that made one task impossible to complete that brought me to a halt.

For the most part, though, it's an easy game to play and keep playing, a series of straightforward but involving tasks that can be chewed through without too much exertion.

It's a shame that these puzzles aren't linked by a strong narrative, characters or setting. There's a real uncertainty of tone, as to whether the game is supposed to be a fun magical outing for kids or a darker breed of fairytale.

A measured blandness that offends no-one.

Isabella's fairy sidekick is Disney's Tinkerbell in everything but name, but it's hard to see girls who love Disney Princesses being interested in the gothic gloom of the cursed castle, all illustrated in that painfully 90s 'photo-real' style popularised by Myst et al.

Even when the darkness is banished from each area, the castle is a very adult idea of old world charm, a series of lavish rooms filled with well-polished antique furniture and cute nick-nacks. Only kids whose idea of magic involves tasteful upholstering need apply.

Perhaps that's the secret of these games' success - a measured blandness that offends no-one, even if in the process it doesn't enthrall anyone either.

I'd much prefer a game that has stronger convictions.

Personally, I'd much prefer a game that has stronger convictions, that committed to being either a gothic frightfest or a sparkly, child-friendly magical adventure, rather than sticking to the middle-of-the-road.

While it features magic of a sort, Witch's Curse is just too bland a potion to conjure any sense of the uncanny.

You can support Mark by buying Princess Isabella: Witch's Curse