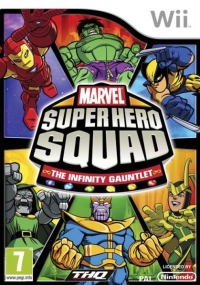 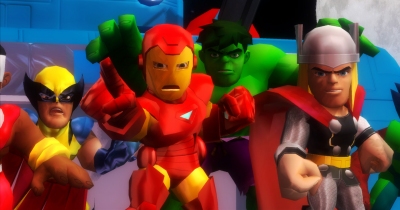 A big deal, then, but not on this occasion, where Spidey and pals are presented as cute and, well... small.

Marvel Super Hero Squad: The Infinity Gauntlet, a spin-off from the kid's cartoon, isn't quite Marvel Babies, but it does turn the Marvel superheroes and villains into cute, cartoony little characters, and their conflicts into less violent, funnier adventures. The Infinity Gauntlet adapts a storyline from the second series of the show, itself a (loose) adaptation of a classic comics story written by Jim Starlin.

It's a testament to the strength of the characters that not only are they clearly, distinctly themselves in an infantilised, parodied form, but that this skewed version of the Marvel universe works so well. Thor is the perfect straight man, all flowing blond hair and Norse pomp, while Iron Man is cocky, clever and therefore doomed to be proven wrong. There's a logic to even the most tongue-in-cheek twists on existing characters, such as the Silver Surfer speaking in surf dude slang rather than portentous cosmic prose.

Hulk's interactions with the other characters are an endearing highlight of the game.

Then there's the Hulk, who really doesn't need much alteration to fit into such a world. This is the classic 'dumb' Hulk, and he's a very child-friendly, comical character already. Hulk's interactions with the other characters are an endearing highlight of the game.

Actually, most of the Marvel universe stuff - heroes, villains, environments - suits being shrunk down and cutesified in this way, retaining a lot of the imagination and verve of the original stories while stripping out all the angst and continuity. Who could resist Thor and Hercules taking challenges to prove who is the best in Olympus, or Nightmare taunting Hulk with a demonic birthday cake?

In this recontextualising of familiar source material for a younger audience, Super Hero Squad: The Infinity Gauntlet has a lot in common with the Lego 'insert name of movie here' games, and indeed the gameplay takes a lead from Travellers Tales games too.

Simple beat 'em up action against floods of enemies, simple puzzles based on character-specific abilities, unlockable costumes and a freeplay mode to explore every last corner of each level: Infinity Gauntlet has all the Lego game traits apart from the actual brick-building puzzles.

This recontextualising source material for a younger audience has a lot in common with the Lego games.

It's a good formula, and the outright fantasy of the Marvel universe is a better fit for this kind of game than, say, the Indiana Jones films. It's certainly well ahead of other Lego-a-like games out there.

This certainly isn't a perfect game. Like a lot of licensed games, Infinity Gauntlet suffers from having sections that feel loose and inadequately play tested: a series of tasks where the heroes have to guard machinery against saboteurs are tedious, and seem to drag on forever, for example. There's a limit to how many times I'm willing to guard a series of pipes, but your patience levels may of course vary.

If you like Marvel comics characters - and even if you never pick up an actual comic, chances are you have a favourite from one of the many movies - then Marvel Super Hero Squad: The Infinity Gauntlet is a solid slice of knockabout, humourous superheroic fun.