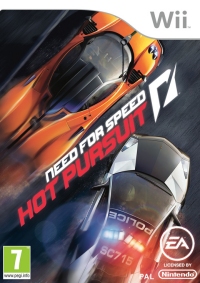 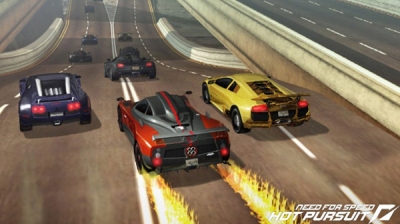 Need for Speed Hot Pursuit Wii is a capable street racer on the Wii, one which balances realism with outright fantasy.

Fast cars are the perfect subject for videogames, which is presumably why there are so many racing games on every format. Not only is racing a simple, dynamic basis for gameplay, but driving a powerful car is a power fantasy accessible to even the most unimaginative player.

Take Need for Speed: Hot Pursuit Wii. Set in the world of illegal street racing made famous by The Fast and the Furious and, well, all the sequels to that film, it has no human characters, just cars. Very fast cars.

It's a scenario open to the crudest wish fulfilment, stripped of any human signature that might throw a barrier between avatar and player. It could be anyone behind the wheel.

It could be you. Nevermind the level of skill, knowledge and discipline that separates the average muppet in a Ford Fiesta from a top class racing driver, said muppet can still believe that, with the right wheels and a bit of practice, he or she could leave their rivals (and the cops) in the dust in some exotic urban locale.

A common daydream then, albeit never mine. I don't have a licence to drive and my main memory of the few driving lessons I took was of a steady pain rising up my spine the longer I sat tensed in the driving seat.

Nonetheless the right driving game can drag me into that high speed head space for a little while.

It's a scenario open to the crudest wish fulfilment, stripped of any human signature.

Although it doesn't have the sunny charm of Out Run or the cartoon fun of Mario Kart, Hot Pursuit hits a pleasant balance between the quasi-realistic criminal aspects of street racing and the kind of silly, fantastical stunts and power ups that set a game apart from a simulation.

Starting out in one of those sharply neon, fearsomely modern Chinese cities that have been built in the last decade or so, I found myself drawn into the simple arcade thrills of Hot Pursuit.

For a Wii title, wiimote and nunchuk controls work better than i would expect. Drifting is straightforward to master and the power ups, crashes and jumps are enjoyably extreme.

This being the Wii it lacks the realistic detail and pizazz of a racer on the 360 or PS3, but the visuals are bright, bold and sharp.

It has no human characters, just cars. Very fast cars.

The career mode sees the player racing in different types of street race to open up new races and eventually race against a boss in each area. These are the usual placed, timed and elimination modes, with the most fun being the Rush Hour elimination race where you have to blast through the ranks of 99 opponent cars to win.

It's all a lot of fun, and the racing dream of being an irresponsible eejit competing in illegal races is quite a seductive one. Sadly, for me, it couldn't last, simply due to my driving incompetence: I reached the second tournament and crashed into my own lack of ability. Wipe out, wheels spinning, the end.

Need for Speed: Hot Pursuit is a decent example of the type. It's just not my type, at least most of the time it isn't.

You can support Mark by buying Need for Speed Hot Pursuit