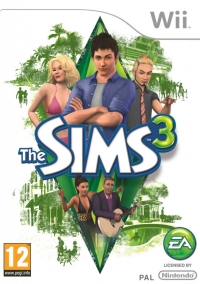 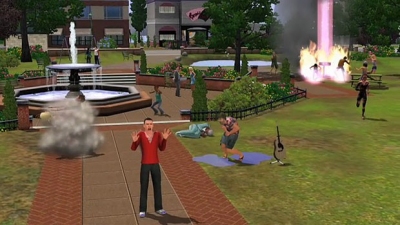 The Sims 3 Wii and its world of pet-humans failed to find favour with this hard-hearted writer, partially due to his own misanthropy but also due to the game being quite badly made.

In theory, a game like The Sims should appeal to an (allegedly) creative type like myself. Playing around with characters, setting them loose in a sunny, happy little world and watching their interactions - this should be fun for a writer to do, some of the best parts of creative storytelling combined with a little of the structure I enjoy in RPGs.

Playing The Sims 3, at least in its Wii incarnation (and more on that later), didn't hold much appeal for me. Not only did its charms leave me cold, but I found my attitude to the game getting icier the longer I played.

Perhaps it's the busman's holiday aspect that put me off? Creating characters, working out all the details of their lives, is the most vital part of writing any story, it's part of my job and maybe that leaves me disinclined to spend my free time deciding on eyebrow placement for another set of imaginary people.

My sheer joy in having to design an entire house worth of Sims can probably be summed up by the speed with which I found myself resorting to just randomising characteristics. And the fact that my final Sim had the Christian name Default. That wasn't actually the default name, I typed it in specifically.

Anyway, having created my little gang of Sims, and failed to build them a workable house - see below - I went to see what I could do with them, which was not much. There are barbeques to cook on and eat from, houses to explore (and bathrooms to be used when needed), other Sims to talk to (but only in Simlish, so meaningful communication is limited), and careers to be adopted.

I get it, of course, I do. The Sims aren't people who create interesting human narratives in their interactions, they're humanoid pets who engage in caricature soap opera activities that can be expressed with simplistic icons and meters, graphic representations of how happy or sad or tired they are. I do get that.

It very much isn't my thing. As someone who could kill a cactus through neglect, I'm not really into pets, and prodding these little faux people around their town-shaped cage doesn't hold much appeal for me. I want a stronger imposed narrative, not a toolkit.

But only to a certain extent. Because on the Wii at least, leaving aside whether I'm suited to playing a Sims game at all, this is a deeply compromised piece of software.

The Sims series, with its ethos of customisation, is very much a PC native product, and while there's no reason it can't be squeezed on to a console, on the under-powered Wii it suffers horribly.

For a start, the Wii-mote is a horrible control device for a game that requires you to adjust the layout of a house with a degree of fine tuning. Putting in interior walls alone is a nightmare, like trying to draw a line using a pen taped to the end of a very long, very wobbly branch. Placing furniture is headache inducing.

Creating characters, working out all the details of their lives, is the most vital part of writing any story.

The initial character customisation stage works better, with a wide array of options, but the poor old Wii does seem to grind and slowdown when trying to quickly scroll through, say, a dozen different jacket options.

That slowdown is as to nothing compared to the grind once your Sim leaves the house and hits the streets. The seaside location of the Wii version of Sims 3 - a pleasant enough Californian vista of blue skies, blue seas and white buildings - might as well be called Pop-up Bay for the extent to which objects only appear when they're three inches in front of your Sim's face.

Then, at certain angles, buildings and objects will become transparent to allow the player a better view of what they're doing. Except that the game is rather trigger happy with this function, to the extent that buildings will disappear for no good reason. Find your Sim running on the spot, and chances are he or she is blocked by an invisible building.

Then there's the slowdown. And the freezing. And things just not working for any real reason.

All this might be manageable with a tutorial or comprehensive manual to make navigating the game seem worth the while, but really The Sims 3 does little beyond telling you the controls and basic mechanics of the game then throwing you in at the deep end.

This should be fun for a writer to do, some of the best parts of creative storytelling.

Sure, this is a very popular franchise, but it's also aimed at a broad mainstream of gamers whose knowledge can't be relied upon. Flailing around without knowing what you're doing is bad at the best of the times, doing it in a flickery world of disappearing buildings while the Wii seizes up for a few seconds in every minute is infuriating.

I'm not sure there's a Sims game out there for me. What I do know is that The Sims 3 for Wii certainly isn't, and with the game released in such shoddy state I doubt it'll be many people's ideal Sims game either.

This is my last Storygamer column for a few weeks as I take a short break. Thanks to everyone who reads these reviews, and I'll be back soon (Ed: Feb right, it is Feb isn't it? Please say it will be Feb).

You can support Mark by buying The Sims 3