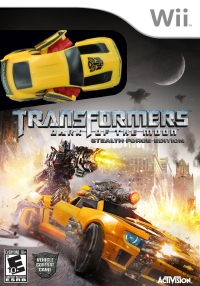 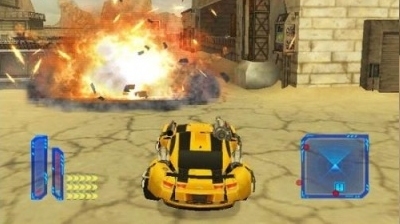 Transformers: Dark of the Moon Wii is neither a good use of the Transformers concept nor a decent game in its own right.

There's a little Autobot-logo-shaped flash on the cover of Transformers: Dark of the Moon: Stealth Force Edition Wii that discreetly states that this is a Vehicle Combat Game.

Really, this is sufficiently significant information that it should have formed a third strata sub-title for the game, boldly stating that this is a version of Transformers which is all about vehicle modes, not distracted by all that business of those vehicles turning into robots.

Because yes, in the 21st century on perfectly functional hardware someone has made a Transformers game which doesn't actually allow you to play in robot mode. Instead, you transform from vehicle mode into the titular Stealth Force mode, which is... another vehicle mode, albeit a floating futuristic version of your vehicle which has guns and steers like a greasy shopping trolley.

To be fair, the concept of transformation is at least at the heart of the gameplay, with a requirement to think strategically - or at least react quickly - and shift between the two modes to survive. Vehicle mode leaves you as an ordinary vehicle, grounded and without weapons but faster, while Stealth Force Mode has you armed to the teeth but slower and burning energon fast.

Each level is a contained area, not quite featureless enough to be described as an arena, where waves of enemy vehicles pour in and you, as one of a rotating cast of Transformers, have to survive long enough to fulfil simple objectives such as scoring a certain number of kills, blowing up a door or protecting transmitters.

A lot of these objectives, each of which have a whole mission to themselves, are the kind of throwaway challenge that is usually included in a game as an inessential mini-game for extra credit, such as speed runs between glowing markers. Usually a snack, here they're passed off as the main course.

Regardless of the scenario or scenery, this amounts to pretty much the same thing - drive around in circles, picking up power ups and occasionally flipping into Stealth Force mode to strafe a few baddies. When health starts to get low, flick back into vehicle mode again and run around collecting more power-ups... and repeat until done.

As I said there's a little bit of strategic thinking on the hoof to be done here, judging when to fight and when to run. Combat is a primitive business, a matter of spinning around firing bullets and missiles on an effectively 2D plane, strafing to target and dodge a little.

There's an extra, presumably accidental peril that comes from a strange dual control system - while the nunchuk thumbstick controls steering in vehicle mode, in Stealth Force Mode the stick is used only for strafing and turning left and right is assigned to the d-pad on the wiimote.

It takes a certain amount of concentration to handle this eccentric and unnecessary alternation between control schemes, and it doesn't help that the wiimote/nunchuck combo is spectacularly unsuited to vehicle games in the first place - although that doesn't seem to stop them appearing on the platform.

A jarring machismo and brutality that sits uneasily with the Autobots ostensibly peaceful inclinations.

The action is all very basic stuff, even with the control complications, with repetitive enemies and flat, basic environments. As a driving game with weapons, a latter-day Carmageddon if you like, it would be unsatisfactory.

As a Transformers game it's a washout, failing to deliver the very basic experience of playing both a vehicle and a giant robot. There's really no excuse for limiting the game in that way, and trying to spin the decision as creating a focussed Vehicle Combat Game really doesn't fly. While the Wii may not be the most powerful hardware available, War for Cybertron (DS) managed to provide full transforming action on much cruder kit, and be pretty damn playable with it.

The decision to stick to vehicles only doesn't feel like a creative or technical decision, but rather a business one, a cost-cutting desire to create a simple game that will work, look OK in screenshots and function in the most basic sense. Dark of the Moon is indeed functional - in spite of the crude controls there's nothing game-breaking here, in fact there's precious little to break, just simple environments in which the player and a load of enemy cars drive around capping each other.

The game's trimmings feel cheap too, with 2D cut-scenes that look like they've been animated in Flash, and which adopt an illustrative style that doesn't really match the in-game graphics, but which lacks any real sense of style or dramatic flare. Combine this with gameplay graphics that are absolutely standard but unspectacular, and you have a visually uninteresting game.

Unusually this is a game that sounds better than it looks. The score is suitably cinematic and orchestral, while Peter Cullen is on hand to provide Optimus Prime's distinctive voice, supported by a cast of voiceover veterans including familiar videogame actors Nolan North and Steve Blum. With the authentic voice of Optimus and a solid cast, it's a shame the number of in-game lines is so limited, and repetition quickly sets in as the same enemy quips cycle around.

I felt weary myself, weary at the pointless excess of it all.

The dialogue is altogether uninspired, as is the plot that lies beneath and which has the unenviable task of trying to logically string together a series of random racing challenges and shootouts into a cogent plot.

Dark of the Moon is ostensibly a prequel to the movie of the same name, bridging the gap between the second and third of Michael Bay's Transformers films, but to be honest the story is so thin it could be from any incarnation of the franchise: the Autobots are trying to find out what the Decepticons are up to, while the Decepticons try and prevent the Autobots from finding out about their current plot device.

The main legacy of the Bay movies is a jarring machismo and brutality that sits uneasily with the Autobots' ostensibly peaceful inclinations. When Optimus, a character usually appealing for his reluctance to do battle and his war weariness, bellowed at Bumblebee to blow more Decepticons to pieces because force is the only thing they understand, I felt weary myself, weary at the pointless excess of it all.

Transformers may never be high art, but it would be nice if what little merit it has wasn't so spectacularly trampled on in the rush to be needlessly badass.

What little drive or empathy the story may have is frittered away by the baffling decision to switch sides midway through the game - suddenly, you're playing the Decepticons and blowing away the enemy instead. The Transformers games have included parallel Autobot and Decepticon campaigns in the past, but switching sides mid-track feels needlessly alienating - suddenly, right is wrong.

A smarter game would do something with this moral flip.

A smarter game would do something with this moral flip, but this isn't a clever game. It's certainly not a good game. The decision not to include any robot-mode gameplay is a mistake, but could have been at least partially overcome if the supporting story and strength of core gameplay had created a compelling experience that felt part of the Transformers universe.

Instead, Dark of the Moon feels detached from all of that - it doesn't capture the spirit of either the movies or the wider Transformers franchise, instead it's a lot of cars rattling around empty levels half-heartedly shooting at each other. It's a game that doesn't feel like it has any good reason to exist. It certainly doesn't provide any reason why you should buy it.

You can support Mark by buying Transformers: Dark of the Moon