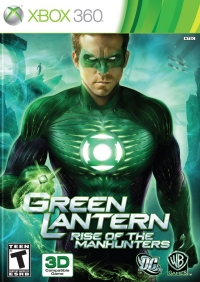 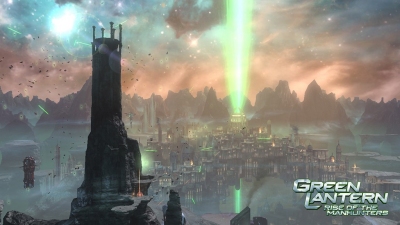 Green Lantern: Rise of the Manhunters plays the system card well with Trophies and Achievements that turn a derivative brawler into something with legs -- for the systemically addicted at least.

Anyone familiar with God of War will recognise that Green Lantern takes many cues from it, not least the fixed camera perspective and the manner of combat. Although Rise of the Manhunters dispenses with screen-filling behemoth boss encounters, it is fundamentally God of War minus the inventiveness, with a sci-fi spin and a lick of green paint.

Green Lantern: Rise of the Manhunters is precisely the type of game that PlayStation Trophies (and Xbox 360 Achievements, for that matter) were made for. It takes around five hours to play though and on the face of it doesn't offer much in the way of replay incentives. That is until you notice the Trophies/Achievements. They offer a system centric lifeline that substantially extends this otherwise mediocre game.

These meta-reasons to keep playing are the invention of this generation of consoles (and PC's thanks to gaming platforms like Steam) and add a compulsion to keep you plugging away long after the real fun has left the room. Because Trophies can be viewed publicly and your overall score is an extension of your gaming prowess, every last one counts. Even those in an average movie license game.

The plot of Green Lantern: Rise of the Manhunters carefully side-steps the film so as to avoid spoilers for those yet to see it. Instead, Hal Jordan of the GL Corps (a kind of interstellar benevolent police force) go toe-to-toe with the Manhunters (a much, much less benevolent force) as they vie for control of the universe. The winners get to make and enforce The Law. That's pretty much it.

I found myself looking beyond the derivative adventure and discovering new ways to progress.

At your disposal is your Ring of Power, a weapon wielded by all the Green Lantern's. It's with this ring, and not your fists, that you will be dealing most of the damage, and earning most of your Trophies. The ring grants you the ability to construct weapons made of mostly indestructible Hard Light.

It's a versatile tool and a quick view of the Trophy guide for Green Lantern reveals rewards for using it in creative ways. Although it's easy to breeze through much of the game using the ring's basic augmentations, if you want to rack up Trophies you need to work at upgrading your abilities. Then it's a simple case of defeating ten enemies with your Gatling Gun enhanced weapon and "Bling" another Trophy is unlocked.

I initially found the Gatling Gun unwieldy, but in pursuit of the Trophy I eventually learned how to use it and actually found the game became much more enjoyable. It's an incredibly destructive piece of kit and frequently became my go-to weapon of choice.

What are Trophy's purpose on the system, really?

As my Trophy hunt continued I found myself looking beyond the derivative adventure and discovering new ways to progress and new areas to investigate. Although I'm on the fence about the worth of the Trophy system, here it's hard to deny that they served their purpose. In the case of Green Lantern, Trophies rescued a pedestrian adventure from the bottom of my gaming pile.

But then, what are Trophy's purpose on the system, really? They could be seen as a manipulative ploy by developers to get gamers playing sub-standard games for longer, or an effort to introduce competition between players to get them playing and buying more games. Either way, as a systemic tool they have me by the tail. The final Trophy/Achievement in Green Lantern: Rise of the Manhunters is appropriately named, the criteria for winning it is to collect all the Trophies the game has to offer. A job for only the most devoted Trophy junkies. "Fear This".

You can support Kelsey by buying Green Lantern: Rise of the Manhunters