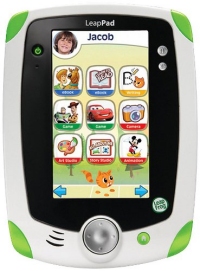 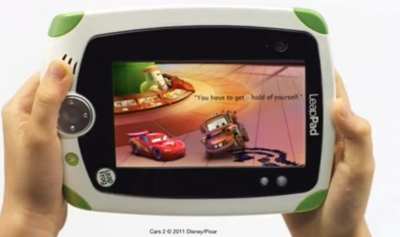 Leapfrog's LeapPad offers a bullet proof alternative to the iPad, but struggles to match Apple's allure -- even for four year olds.

I am filled with pride that my four year old son has grasped the concept of touch-screen technology. It's always a special moment, receiving a phone bill full of charges for calls I didn't make to people I haven't spoken to for years; or switching my phone on to find the latest Android game sitting on my home screen. I'm making notes, young man and this is all being deducted from your pocket money when you are old enough to demand it.

But, the odd accidental purchase or gobbledygook text aside, it's encouraging that my child is (and hopefully more children are) unafraid of such tech and are taking to it like ducks to water. iPads and similar tablet PC's are common objects in even primary schools now.

So with that in mind I recently took the youngling to Toys R Us to see if anything similar and more child-friendly (durable) existed to encourage his enthusiasm of emerging tech and to possibly prolong the life of my smart phone. My young Systemic Gamer offspring and I were faced with two choices: V-Tech's InnoTab and LeapFrog's LeapPad.

Both the InnoTab and LeapPad are touch-screen tablet PC's for kids and both boast remarkably similar specifications on the box. But only one of them is the same colour as Buzz Lightyear. Guess which one we went home with? Score one for LeapFrog.

LeapFrog have been neck-and-neck with V-Tech when it comes to bleeding edge technology for kids and I have been consistently impressed with their respective output for years. LeapFrog's attempt at a tablet PC, however, frequently left me and my son pining for an Apple product.

In its favour, the LeapPad has a great physical build. It feels solid and durable in your hands and the generosity of the plastic that surrounds the deep set four inch screen makes me feel secure in the knowledge that my GBP 69.95 won't fly out of the window if this thing takes an accidental tumble down the stairs. However my son, on investigating the case, found it all too easy to flick the battery covers off and expose the 4 AA's that the LeapPad requires. Not ideal.

Speaking of batteries, buy rechargeables. The LeapPad has no sleep mode so when it is occasionally, and inevitably, abandoned in the middle of the bedroom floor it will play happily away to itself until the batteries dry out in around 4-5 hours.

The LeapPad has a great physical build.

There is a mains adapter available but show me a kid who wants to be tied to the wall-socket and I'll show you a liar. Particularly as the inbuilt camera brings out the David Bailey in my kid and the view from the couch can get pretty old pretty quick.

The camera/video recorder combo is of the VGA not MegaPixel variety. You will be very hard pushed to find a poorer camera on even the most budget mobile phone. In fact, the V-Tech KiddiZoom camera is a vastly superior 1.5MP. It is however a very popular feature with my young happy snapper.

Once he adapted to the sizeable delay between pressing the shutter button (located on the touch-screen) and the camera focusing and actually taking the shot, he was happy to fill the internal memory with pictures of his Mum and videos of his journey from the TV to the kitchen. And back again.

The non-expandable nature of the internal memory was a sticking point for me and one of the reasons I hesitated handing over cash for the LeapPad. But the meagre 2GB of storage does take a while to fill up, especially when the primitive nature of the camera is considered. Apps purchased from the LeapFrog app store are similarly low in size and the memory can be purged to the home laptop when full. So all the Spielberg-style opus' of one boy's epic journey from the bedroom to the bathroom can be kept forever and replayed on PC.

PC connectivity is encouraged by LeapFrog and the downloadable app suite keeps track of various usage stats and suggests software that would benefit key areas of the child's development and education. From story book apps (with a healthy stock of Disney licensed tales) to maths and simple coordination games, the LeapFrog store has plenty of download titles available to prolong the life of the LeapPad.

They don't come cheap though. From my point of view, I can buy thousands of titles for under a pound each from the Android Market that are professional and useful, so spending as much as GBP 7.99 on a pinball game or even GBP 24.99 on an eBook for the LeapPad seems extortionate.

Although the LeapPad is a nice enough toy, I know my son will return to my iPad

Although my four year old gets on well with the LeapPad and has picked out his favourite applications and returns to them frequently, it is no powerhouse. My son is not well known for his unwavering patience and the amount of lag on some of the software has not gone unnoticed by him.

The basic Paint app, for instance, takes a moment to realise that the stylus is touching the screen, making the inevitable, rapid scribbles that follow look unnatural to a viewer and unintuitive to the user. The screen responds only moderately well to finger or stylus contact.

But the reason that fuelled this purchase is the very reason it doesn't quite hit the mark. You see, my son cut his touch-screen Systemic milk teeth on my devices: iPad, iPod, smart phone. Although the LeapPad is a nice enough toy, once the stylus' are lost, once the built in applications become tiresome, I know my son will return to my iPad for another session of Cars AppMATes. And who can blame him, really?

And so, it seems I have come full circle. From bemoaning my child's occasional and annoying use of my smart phone or tablet PC, which led to the purchase of a kid-friendly alternative, I find myself in a position where I would rather further his technological education by giving him supervised access to the iPad.

You can support Kelsey by buying LeapPad