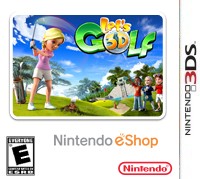 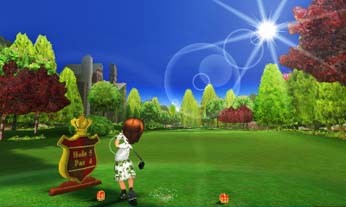 Let's Golf 3D may not be the most intricate of Golf simulators, but the bite-sized challenges, addictive gameplay and the fact that it installs to the handheld mean that this is a title I keep coming back to over and over.

Let's Golf 3D is a budget title available for download from the 3DS shop. It's very much in the style of Everybody's Golf, in that cartoon visuals, powerups and special moves are more significant than leg angle, grip style or even club selection.

What makes it such a great game is the huge amount of courses and options available. There are 6 courses, each of 18 varied holes. Each course also has a range of challenges available, from last-man-standing to closest to the hole. To put this variety of gameplay in context, Wii Sports Resort's golf mode only offers normal play over 21 holes in total. That game is a very different beast, of course, but it does go to show how much is offered here for an asking price little more than a fiver.

What makes it such a great game is the huge amount of courses and options available.

The variety of level styles is also well considered. There are plenty of normal style courses available for a more realistic golf experience, while holes set on the frozen ice of Greenland and over the stone temples of Mexico offer a more novelty feel. I quite like both the fantastic and real being offered by a single golf game and not being forced to choose between the two from the start.

I personally appreciate the shared screen two-player mode, which allows me and my partner to play two player on the same 3DS. Sadly, we tend to turn the 3D off for two-player matches because we want to watch each other's turns and the 3DS screen doesn't work well for spectators. Also, given that the mode is turn-based anyway I don't really understand why it is restricted to only two players. I would have thought that additional players could have been added quite simply.

It's not perfect by any means. The camera and controls can be very fiddly when choosing the best shot. There is a nifty after-touch feature which allows you to add spin to the ball to control the landing, but unfortunately the automatic camera sometimes refuses to show a clear shot of where the ball will land, making use of this feature somewhat intermittent.

Let's Golf 3D also features an almost role-playing-like feature, in which progress unlocks new outfits and equipment for the characters which allows you give bonuses to their abilities. Characters also gain XP and levels as you use them to play, increases things like length of shot and accuracy. To be honest, it's quite hard to tell the difference between the different player's stats in single player, but when playing in two-player it becomes apparent how distinct is each characters mix of strengths and weaknesses.

We want to watch each other's turns and the 3DS screen doesn't work well for spectators.

I hadn't realised at first that changing the costumes modifies the character's stats. I had previously thought that the dressing up and accessories feature was simply to make your avatar feel a bit more personal. I actually found myself a little disappointed that to make the most of my characters abilities I had to opt for costume choices that were more practical than aesthetic.

What will really define your play style in Let's Golf 3D is the special move of each character. This is driven by a power bar which fills throughout the match and provides extra perks such as negating the influence of the wind, or even creating a whirlpool around the hole which will draw the ball in. It's a canny design choice that allows you to identify the weakest part of your game and overcome it occasionally with an in-game skill. For me, I choose the whirlpool and save it for particularly tricky greens.

It isn't without its flaws, but then it is an extremely cheap 3DS-only game. It's handy having it installed to the 3DS memory because I can pick it up and play it whenever I feel inclined. The shorter challenges, such as getting closest to the hole in one shot, or collecting stars from around a course also make this a handy title to have. It's never going to compete with bigger and more involved games for my time, but as a handy filler title goes, it's one of the most entertaining and great value.


You can support Simon by buying Let's Golf 3D