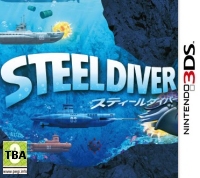 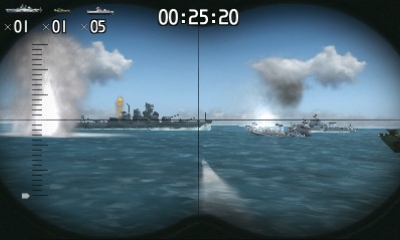 Despite not managing to create a coherent experience, Steel Diver offers a technical tense drama with a unique atmosphere. I suspect that many players will want to see more of the elements that make Steel Diver great.

I found Steel Diver to be more akin to three totally disparate submarine-inspired games on the same cart, as opposed to a single cohesive experience. I've known for a while that the game featured a mixture of side-scrolling submarine exploration and combat, first-person torpedo shooting and a tile-based strategy board-game and I was interested to see how these very different styles would coalesce into a single game. The truth is, they never really do; in Steel Diver I found three totally different genres which never quite form a whole.

This may or may not detract from the experience, depending on your preference; because, what Steel Diver does offer it delivers very well indeed, creating an experience which is, if not unique, then certainly very rarefied in gaming. Submarine action is a different style of drama to other genres and the atmosphere created by listening to hastening sonar echoes, wide turning circles and delayed command responses accompanied by barked instructions from the Executive Officer is incomparable.

While playing, I almost felt like I wanted voice control over the game: to be able to shout "all ahead flank!" or "back emergency!" and to see my sub motor through the seas at my command. However, the touch-screen commands do a good job of reproducing this with sliders for speed, depth and inclination. The fight to control the momentum and damage on board the ship creates a powerful sense of tension and a real mastery of the controls is required to attain the highest scores.

At this stage in the life of the Nintendo 3DS, most people are still asking how effective is the 3D effect. Steel Diver is another game, like the excellent Ghost Recon (3DS), which will divide opinion. While the side scrolling sections could be said to benefit little from the 3D effect, I found that the 3D helps to differentiate between background and foreground obstacles and adds greatly to the atmosphere of the undersea environment, especially when cruising between fronds of seaweed and schools of fish.

What Steel Diver reveals about the Nintendo 3DS hardware is the surprising accuracy of the motion control. The Periscope Strike missions require the player to rotate the 3DS around themselves (in the manner of a periscope) to target and shoot enemy ships with torpedoes. The relationship between on-screen rotation compared to real-world movement is virtually 1:1. I tested this by looking at the position of the sun on-screen, then turning a complete circle until I was facing the same direction I had begun -- the sun, in-game, remained in the same position.

The Periscope missions are also highly atmospheric, particularly the rolling waves of the pitching storm. The 3D visuals are particularly effective here, as the torpedoes cruise away to strike the hull of the unsuspecting ships. These can also be controlled using the touch screen if, say, you find yourself in an environment unsuited to standing and twisting around; personally I found that these controls were more fiddly and didn't allow for a combination of turning and shooting/ducking -- making it much harder to score highly.

Some may consider Steel Diver to be a little short as there are only 7 levels in the main game and 9 very similar-looking maps in the Steel Commander sub-game. For those who found Pilotwings Resort (3DS) to be something of a light lunch, Steel Diver seems to offer little more than a 'tween meals snack. The game does make good use of limited resources though, with each of the three different playable submarines providing a genuinely different approach and the time-trial ghosts to beat and collectibles provide some much needed depth (a pun that is almost impossible to avoid).

Because, somewhat oddly, Steel Diver is all about time and score attack. Rather than an adventure storyline which carries the player through themed missions, Steel Diver actually plays more like an underwater (and slow-paced) racing game, with each of the 7 levels representing a course to be completed again and again for improved completion times.

The Steel Commander strategy game may well provide some longevity, offering a generous download-play multi-player mode which requires only one copy of the game. While Steel Diver does struggle to integrate its experiences, the best relationship between styles is to be found here, between the strategy game and the periscope shooting. Here, when a submarine unit is moved onto the tile of an enemy fleet or submarine, it makes sense to change to periscope mode to fire upon the enemy. My first impression was that the strategy game lacked detail and required a more complex interaction between units; but, while the basic rules of the game are simple to understand, it is only through continued play that the subtleties of the strategy required begin to appear. The game rules require the player to carefully balance moving ahead in enemy territory or handling incoming threats.

the atmosphere and tension of submarine combat is beautifully re-imagined.

There are a couple of technical flaws which I found frustrating. When attacking an enemy sub in Steel Commander the target is almost invisible on-screen even in a darkened room and certainly would be impossible to see in bright or reflective conditions. Also, the game features bonuses which can be attained at the end of each campaign mission -- the use of these I found to be essential to gaining the highest scores and beating the tougher levels; however, the game awards these arbitrarily and I found it frustrating to continually win the same buffs as opposed to completing the collection. This forces multiple replays of easier levels over and over again to try and gain the required award.

While Steel Diver may feel like a collection of three different short games bundles together, it succeeds by offering a game-play experience hitherto only catered to by the PC games market. While the style is arcade in approach, the atmosphere and tension of submarine combat is beautifully re-imagined, alongside some effective and attractive 3D visuals and great sound design. I don't feel this is a game which is going to encourage long sittings, but will doubtless be a title to which I return regularly for a quick dip.

[Chris Jarvis writes the Novel Gamer column where you can read his Steel Diver fiction.]


You can support Simon by buying Steel Diver