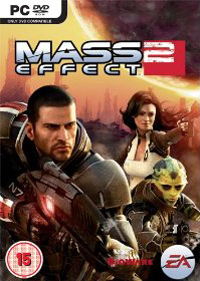 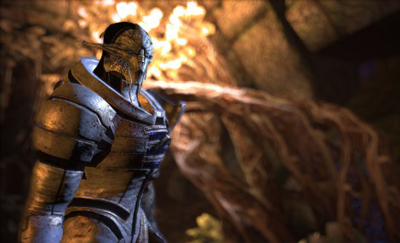 Mass Effect 2 on PC and Xbox 360 is a beautifully crafted space opera from the characters to gameplay. Technically too, this is simply a much better game, benefiting from techniques that improve every aspect and bring a fulfilling game full of jaw dropping moments and brilliant gameplay.

Mass Effect 2 continues the outer space drama of humanities plight against, depending on your choices from the first, a great and many different things, such as the citadel council or most likely this games massive threat - the Collectors.

The game opens with a surprise attack on the Normandy which soon leads to a massive technical feat of highly detailed characters and environments. Within ten minutes the game will have your jaw on the floor with numerous huge vistas, plot twists and beautiful space scenes.

Within ten minutes the game will have your jaw on the floor with numerous huge vistas, plot twists and beautiful space scenes.

To be honest I was expecting a massive story that was just as epic as the first game; although now looking back I don't really think anything can be more epic than saving the citadel and the entire universe.

However, what I found was a familiar gaming trope. The middle game is used as a vehicle to build up for the obvious series finale. This gives Bioware the chance to show their hand when it comes to character creation. Writing, visuals and design all collide to create deeper well defined individuals for the player to meet.

Along the way there are some critical gameplay improvements as well. Among the positive changes, Bioware oddly changed the controls on the PC version, so that the running button will also make you stick to cover, which can present some trouble when traversing the environment. But this isn't the only technical foible. I came across several during my play through.

Although not game-breaking, one particular glitch required me to restart from a previous save. The problem is odd and from what I can tell is caused by the player running into the corners of a fixed object. It caused Shepard to float up in the world but unable to move from the spot on the corner. Sometimes I got lucky and was able to move off but other times it would just keep me there and I saw no way but to restart from my save.

This could be down to a modelling error where the sides of an object aren't connected correctly, but I believe it's far too common for that, or possibly a bug in the code from some of the gameplay refinements of the cover system. Running on a PC, there is of course always the possibility that my graphics card and system setup is having some unforeseen problem - unlike the consoles where a developer knows the exact setup they are designing for. Either way it will likely be fixed via download before too long.

To truly experience the game I recommend buying and completing the first one to see how your choices come to life.

Despite that I didn't stop playing until I had completed Mass Effect 2, it's that compelling! And with this being a deep and involving RPG, it took me a good 30 hours of gameplay to finish. I hardly did any side quests or scan many planets, so it could easily be another five to ten hours longer by doing more missions and mining for resources.

A feature that intrigued me is the manner with which your choices carry over from the previous title, many games have tried this before but never had a sequel that continues what you did in the previous game. I was impressed how much your choices do actually carry on and affect the second game. Don't worry though, if you haven't played Mass Effect the game will fill in the blanks for you. But to truly experience the game I recommend buying and completing the first one to see how your choices come to life.

If you do carry over your save, and character, then you might experience a few nice or interesting comments from people you spared/saved previously. This is a nice touch allowing you to see some sort of consequence to your choices from the first game.

Everything has been improved from the visuals, gameplay and the Unreal Engine has been tweaked and modified to put out some truly technical marvels.

Where Mass Effect suffers from its middle child position is in the story telling. There isn't really much of a story to talk of, unlike the first game. Instead it's the characters that keep you moving forward. Their smaller tales of revenge, beliefs and childhood is utterly compelling and catching up with some old faces to discover they've changed quite a bit is pretty amazing. Without spoiling the surprise, maybe the most incredible part was discovering an old enemy isn't quite the enemy you thought it was.

If you enjoyed the first game you'll love Mass Effect 2. Everything has been improved from the visuals, gameplay. The Unreal Engine has been tweaked and modified to put out some truly technically impressive set pieces. I strongly recommend you go out and buy the first game though - begin your own adventure through this epic space opera and experience the excellent sequel properly.


You can support Simon by buying Mass Effect 2