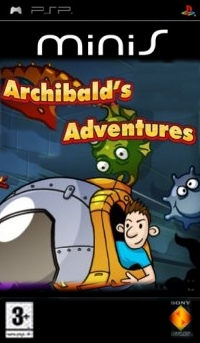 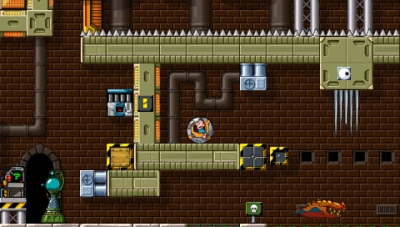 Archibald's Adventure PSP Mini is a surprisingly good platform game with a huge variety of obstacles and puzzles all in bite sized fun. From a technical stand point it's a mini marvel, with its cute and colourful graphics and inventive game play, maybe one of the best examples of what can be achieved on the Minis platform.

Buying games from the PSP Minis range can feel like a lucky dip - for every great game like Archibald's Adventure there are a dozen other half-baked darts games. The iPhone has proven that pocket money prices doesn't necessarily equate to low production values and with careful selection you can also fill your PSP with games that can keep you and the kids entertained for hours and don't break the bank.

Archibald's Adventures, which is also available on PC and iPhone is a 2D puzzle platformer featuring a skateboarding hero attempting to escape a mad professor's mansion. Spread across 191 levels Archibald encounters increasingly complex hazards as he attempts to get to each level's exit.

Initially just a game of jumping across gaps and over obstacles, with each new level it adds new challenges and ways to play the game. The inventiveness of these additions is really the reason to continue playing.

Whilst the introduction of harmful creatures, dripping acid and slamming doors isn't cause for celebration, you soon find yourself remote controlling bubbles that can flip switches and can even find vehicles to use. I found the reward for completing each level pretty compelling as I just didn't know what the developer was going to throw at me next.

I found the reward for completing each level pretty compelling as I just didn't know what the developer was going to throw at me next.

Despite the game design reminding me of the 16bit platformers in both look and style, I can't remember any of those games from the 1990s filling their world with so many different ways to interact with their environments. Modern games like Braid have certainly left their mark on the development of Archibald's Adventures. Whilst there is nothing that mind bending here I did have need to pause occasionally as I worked through the logic of a new type of puzzle.

The biggest recommendation I have for Archibald's Adventure is the fact that it totally consumed the attention of my friends on a recent visit. Even though my PSPgo had games like Motor Storm and LittleBigPlanet installed his attention was held by this little platformer. This even extended to periods when he wasn't playing - we were both stuck on an exploding box puzzle and decided we'd each have a think about it over night. The next morning he was up bright and early announcing at breakfast that he'd thought about it and now had a solution. This is amazing compliment for a game that costs so little.

Archibald's Adventures is the best PSP Minis title I've played and one of the best 2D platform puzzlers to release this year on any platform.

The only gripe I have with Archibald's Adventures is an issue I've had with similar games; puzzles that require both thought and precisely timed reactions are just not my cup of tea. Archibald is on skateboard and this sometimes makes it difficult for me to control him accurately. I would prefer it if success were more dependent on my brain power than my click speed - the slower pace suits the gentle fun feel of the game better than the frantic moments of kinetic commotion.

That really is a minor issue and Archibald's Adventures is the best PSP Minis title I've played and one of the best 2D platform puzzlers to release this year on any platform. It is perfect to just pick up play for short periods, but like me you may just not be able to put it back down again.

You can support Simon by buying Achibald's Adventures