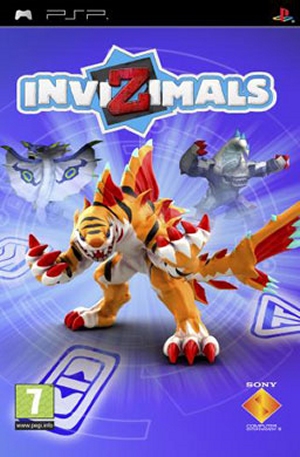 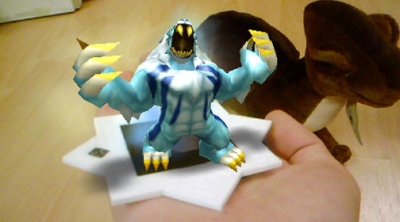 Invizimals is a spiritual sequel to Eye of Judgment, except here on the PSP you don't have to collect cards - all you need is one Capture card. Add to this the got to collect them all Pokemon gameplay and you have a PlayStation Portable game with grand ambitions. Unfortunately, the PSP's hand held technology isn't quite up to that of EyePet's static PlayStation Eye and things get a little haphazard.

In Invizimals you discover and catch creatures then level them through combat. Sounds like Pokemon except here you're not seeking the creatures out in some top-down fantasy land, but in real life top-down dirty bedroom, using the PSP camera to coax invisible monsters out of hiding.

This all gets started through the child friendly single-player Story Mode, which explains how the PSP camera can detect life forms invisible to the human eye - Invizimals. The Invizimals themselves are a well-designed and varied bunch, with some groan-inducing pun names such as Porcupine or Bearserker, which I suppose is better than some random names that Nintendo comes up with for all 300 billion Pokemon these days.

Combat is built around a familiar rock-paper-scissors set up, with each creature falling into a distinct elemental category. You have three types of attack and battles play out in real time, forcing you to master the timing required for blocking. Especially since everything you do uses stamina, leaving you to wait while it recharges, potentially with no way of blocking. Success in a fight earns watts, the game's XP, which levels up your creature with every five levels, it to evolve into a more powerful form.

If you have enough patience though, this like EyePet PS3 has moments of real magic.

I was itching to get on with the capturing, but found Invizimals never quite gave me enough slack. Although you can explore you real-world environment in an augmented-reality kind of way, things never really open up enough to grant a sense of freedom.

As I strolled around the house, the PSP camera feeds the view into the game and add's some detector readouts. Essentially I moved around the house using the "warm... warmer... hot" instructions to find the Invizimal. Once I was locked on I placed my physical capture card on the hotspot as displayed on the PSP, and with a little computer magic, a weird little creature emerged into the real world.

You quickly realise that the camera is looking for fairly specific cues to trigger the Invizimals. For example, specific colours and shapes which generally means you can either go running round your house, hoping to find something appropriate.

Things get trickier as you work your way through the 123 Invizimals in the game. For instance, I had to find and capture a creature that could only be found in purple environments. Being a bloke this wasn't as easy as it is supposed to be. Part of the game's appeal is, of course, that it will send you scampering around the house, seeking out the triggers you need. But I spent literally ten minutes scouring the house, getting friends and family involved in the hunt - who gave me not a few strange looks.

You have to bring the PSP in low and get behind the Invizimal before bellowing to scare it into submission.

If you think the main game sounds a little odd, the minigames have you acting even more strangely. The capture this critter game tasks you with sneaking up on one and shouting. You have to bring the PSP in low and get behind the Invizimal before bellowing to scare it into submission. Quite apart from the indignity of screaming at a tiny wolf-thing that wasn't really there, the camera struggles to cope when the capture card isn't perfectly framed. With the creature flicking in and out of existence, and the small microphone struggling to acknowledge that I'm shouting turns a simple task into a frustrating one.

Some mini-games are engaging - catching Sting Wing by swatting her with your hand is a great example of how the fun and immersive the technology is when it works - but others stretch the small, fragile camera and its software beyond its comfort zone. Using the camera as a surrogate motion sensor to steer Bearserker through a timed slalom is just annoying.

Invizimals is cute and clever, but still a little clunky. Attempting to provide gameplay that the camera can't always handle, it risks frustrating its young audience before they've even collected or evolved a decent collection of creatures. If you have enough patience though, this like EyePet PS3 has moments of real magic.


You can support Simon by buying Invizimals