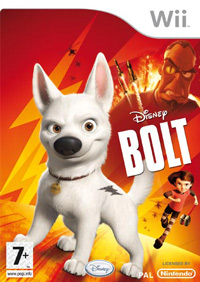 Other GamePeople columnists have reviewed this from their perspective - huh?:
Teen Gamer (Wii)
Family Guide Gamer (360) 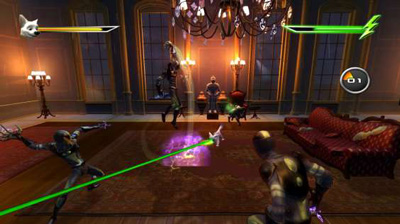 Bolt Wii isn't just the usual aping of a movie story, it's an original prelude to the film. Not technically impressive, but perfect for the film's target audience and a great experience for fans of the movie.

Bolt isn't your run of the mill movie cash-in game, instead it's only inspired by the film and starts with everyone's, or at least now my, favourite Hamster Rhino preparing to watch the Bolt DVD boxset.

Quick back story, the film is essentially Toy Story except with a few roles reversed - Bolt is Buzz Lightyear and Rhino is Woody. So yeah, the Dog thinks it has super-powers, when really it's just starring in a TV show, hence the Hamster being a massive fan and now watching the DVD's.

You start off in the game as a young Penny and Bolt and it introduces you quickly to some stealth gameplay. As some of you may know, I'm a massive stealth fan but this is the child-friendly version, ultimately meaning it's flawed as the only penalty you receive if you alert the guards is a massive animated surprise and then jump you. But here's where a new feature comes in: Quick Time Events, which become the main feature of the game.

Using the waggle of the Wii-mote to do some special moves and getting instantly killed from the little to no warning of death from above was incredibly irritating.

Now as I was reviewing this game my housemates came in and out of my room and asked me what the game is like, and to put it nicely: 'it's a lot like Ratchet and Clank mixed with God Of War.' They would all reply 'Oh Cool... so it's good then?' No.

It pulls off the fast combat of the two, both puzzle elements and Quick time events, but it just doesn't do it as well as either. The old adage 'Jack of all trades, master of none' comes to mind. Camera problems also arise more than once as it has the same locked on camera of the God Of War games but fails to point the gamer in the right direction. Sometimes it would obstruct the view of where you needed to go or what you needed to do, leaving me with the wish to control the camera. Some of this could be down to the Wii-remote not having enough buttons as literally every button does something in a combo with another. For example, to enter super charged mode you must press down and Z.

By this time all my house-mates joined me in my room and stayed to watch me play, not because they think it's a good game but because how angry I was getting with it. Using the waggle of the Wii-mote to do some special moves and getting instantly killed from the little to no warning of death from above was incredibly irritating. In this particular instance I had to pull out a lever on the second level, find my way to an idol in order for a pillar to come down, leaving me to get on top of it before it rises again.

Penny does look weird as she's always smiling but the brilliant animation for all the characters, especially Bolt, makes everything look and act convincingly.

The camera didn't help me find out where I had to go but I got there in the nick of time. So the pillar now begins to rise with me on top of it and then suddenly something flashed up about pressing down and B, although this was last second and I got squashed from the roof above and had to go back to a previous half an hour ago save. As it turns out I was meant to press those buttons in order to activate a power that would allow me to destroy the roof and get onto the next floor, but neither did the camera or the prompt help me by showing me there was a roof above and not just a hole.

Technically, all is good with the game as it runs smooth on the Wii and has some nice visuals with detailed character models. Penny does look weird as she's always smiling but the brilliant animation for all the characters, especially Bolt, makes everything look and act convincingly. The large vistas have excellent textures (although some may look blurry from time to time) and the destructible environments give some pleasing feedback when you're throwing enemies around. The only real problem to mention with the visuals is that some arena-like areas tend to look too empty, which may be down to the Wii's limited hardware.

At its heart, Bolt for Nintendo Wii, is a game made for fans of the movies and it's not a game for everyone. But when handed to its target audience of 7-14 year olds I can see it being quite enjoyable - especially if those kids are new to gaming or have little gaming experience.


You can support Simon by buying Bolt