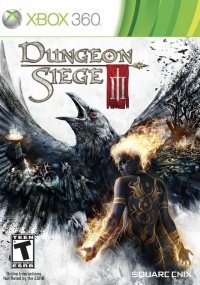 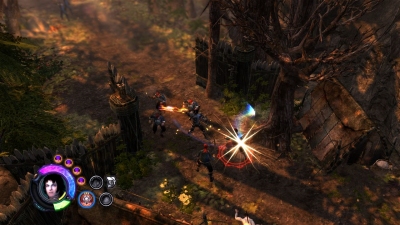 Dungeon Siege III may downplay loot but its action and fighting focus nudges this dungeon crawler towards grander adventuring and role play territory.

I've always enjoyed dungeon exploration games, ever since playing Rouge and Nethack on a school networks during lunchtime. Not the most popular pastime I know, but something about the ever expanding dungeons and all that treasure was strangely addictive.

Having graduated onto the original Dungeon Siege games from Gas Powered games, I was keen to see what Obsidian Entertainment had done with the franchise now they have taken over. This switch of developer took me longer to acclimatise to than I expected though. Dungeon Siege III is much more about fighting than it is about collecting intricate armour, swords and what my friends like calling "loot" with half a grin on their faces.

You control a party of four characters each of who get three defensive skills and six attacking. You can choose different styles of fighting as well. This enables the creation of a varied set of adventurers to suite your style of play. It's a flexible system that results in characters that develop differently depending on the decision you make - both before and during play.

Progressing in Dungeon Siege III relies on efficient use of movement and attacks. There are no quick-fix potions here, so you really have to be on your guard all the time and take seriously your approach to each new area.

This means that unlike other classic games in the genre (I still think back to Dungeon Master and Eye of the Beholder - that my dad still plays) things flows smoothly. At times Dungeon Siege feels more like an action game than a traditional dungeon crawler.

There was one moment for example when I used Anjali to spawn a fire wall and cast a demon dog before pulling off a spinning kick through the flames and slamming her attackers. In a few seconds I had used a range of different attack stances, movement and melee combat and all without really thinking about it. It's satisfying moments like this when the gameplay really works, and Dungeon Siege III's approach makes a lot of sense.

It's satisfying moments like this when the gameplay really works.

Alongside the greater focus on combat, Obsidian have also spend more care and attention on the story than I've seen in other dungeon exploration games. While it's a long way from the epic saga of Mass Effect, Dungeon Siege III adopts a similar approach to conversations - you traverse a branching dialogue tree to pump other characters for information. It's a shame there's not more depth here, as the game's world and this sort of narrative is something that could work really well.

To bolster the sense of story, I thought the multiplayer mode might help. But this is where Dungeon Siege III falls a little short. Firstly it's only a two-player co-op, rather than anything grander or more ambitious. Also, you can't import your own character when you play online with someone else, you have to (like in Fable II) simply select from whichever classes aren't already active in the game.

I didn't really mind the online and local multiplayer limitations, this isn't why I play these games. I also found myself warming to the more action oriented approach after a while. Although the usual buzz of finding new treasure and equipment was diminished - there just isn't the range of things to find or the excitement when you find them - this matters less and less as your attention is focused on moving carefully and strategically through each dungeon.

This introduced a whole new way to enjoy a dungeon crawler.

Combat and exploration is where Dungeon Siege excels, and for me this introduced a whole new way to enjoy a dungeon crawler. Rather than stocking up on potions and weapons before charging into the next level, I found myself mulling over strategies and taking things much more cautiously.

There is an almost Metal Gear Solid feel to all this, which I enjoyed much more than I expected. My friends will tell you I usually play games that simply let me collect things. I really wasn't sure about Dungeon Siege III's new approach, but with a little perseverance I think it is becoming my favourite in the series and quite an education on what the genre has to offer.

You can support Rowan by buying Dungeon Siege III