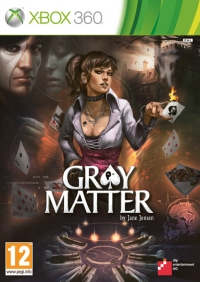 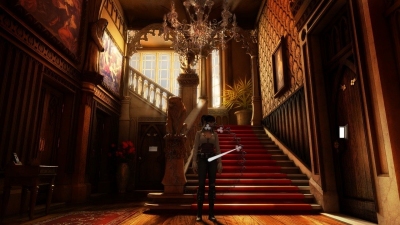 Gray Matter 360 may not change the world, but it delivers a nostalgic point and click experience to a wider audience. I wasn't expecting to like it all that much, but was very soon hooked.

I've heard my dad going on about how great Monkey Island, Day of the Tentacle and Beneath a Steel Sky were, but I've never really got what makes them so interesting. Too much reading and repetitive puzzles that don't make any sense to me - chickens and pulleys for example - have been a real turn off.

I've tried some of the downloadable point and click games too. Sam and Max on Wii-ware was fun for a while, but I couldn't help feeling it didn't quite have the budget behind it that it really needed. This actually made me quite excited to play Gray Matter, it's an original full priced point and click and genuine fresh meat for the genre.

The story introduces the usual combo of spooky locations, magic and a mystery to be solved. It is all very much from the Monkey Island playbook, and reminded me of watching my dad play when I was younger - jokes I never quite get, and over stylised characters making tongue in cheek remarks.

Some of my friends thought Gray Matter looked out of date next to games like Heavy Rain but I think they are missing the point.

It took me a while to get my head around the controls. Of course, on the 360 you don't have an obvious pointing device. Instead you have to use the analogue sticks to guide you on-screen hand. You can hold down a trigger button to access the different items in the current location, which made things a little easier.

After a while though I could easily navigate my way around the game, and got pretty speedy at the different controls. In fact I was enjoying it enough to call my dad upstairs to have a look. He sat down for a while but soon got frustrated not having a mouse. It worked fine for me, but I guess I'm not used to other styles of controls.

It was down to me to progress through the story on my own. This I actually found quite easy. Happily, there is a lot less combining of random objects to solve the different puzzles. This more straight forward approach meant I felt like there was a chance of actually figuring out what I should do using logic rather than wandering around relying on chance.

Gray Matter nails this nostalgia bang on, but in a way that has got a younger gamer like me actually playing it.

Some of my friends thought Gray Matter looked out of date next to games like Heavy Rain but I think they are missing the point. While Heavy Rain is exciting and new, it lacks the finesse and attention to dialogue and story of original point and click games.

Gray Matter nails this nostalgia bang on, but in a way that has got a younger gamer like me actually playing it. Rather than novelty, new interactions, flashy graphics and grandiose claims, Gray Matter gets on with being true to all those point and click games my dad still spends hours re-playing.

I like games that have the confidence to know their limits. Gray Matter stays within its genre, but does so with enough style and grace to win new converts. It has even got me thinking about playing Monkey Island for myself, there's an iPhone version I might try.

You can support Rowan by buying Gray Matter