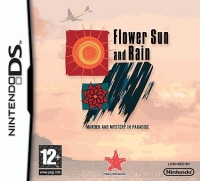 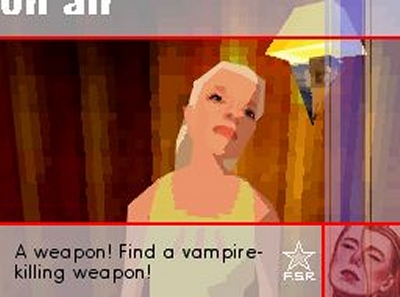 Flower, Sun and Rain: Murder and Mystery in Paradise, says the box. Great, I thought. Who doesn't love to sink their teeth into a god mystery? You play as Sumio Mondo, a 'Seeker', and his mechanical partner, a computer called Catherine.

As the game starts, you learn that the manager of the Flower, Sun and Rain hotel, Edo, for unknown reasons, has called you to Lospass Island. As the game progresses, you learn more about your mission, and yourself. Flower, Sun and Rain has, admittedly, got a tough act to follow. Being created by the famous mystery game maker Suda51, creator of Killer7 expectations are high for his next game.

In the first level you play, it's a simple matter of solving a few simple puzzles. Then again, even these had me stumped for a little while. More of the game, and yet more puzzles. I could see where this was going. By the time I'd played it for an hour, I was quite thoroughly confused. The plot can only be described as chaotic, and the game consisted solely of running and walking around. Not a game for people who get bored easily, then, especially as the amount of talking included in FSR verges on lecture-like. Reading through long, sometimes pointless conversations without the option to skip them makes the game hard to enjoy in some places.

As a mystery game, I think it does its job well. It certainly kept me mystified for a long time.

One thing I did like about FSR is that it has several nice touches to it that improve it dramatically. For example, FSR features a memo button. Here, you can jot down anything you feel might help you in the game, and then later use your scribblings to help you unlock doors. Another feature is the guidebook; a virtual guide to the island. If you don't mind the slightly boring trawling through pages (49 in total, including descriptions, messages and, strangely, play scripts), you can find information to help you on your search.

To be frank, some of the puzzles in this game would confuse even the cleverest of gamers. Simple enough though they seem (Enter a 3 digit code, enter a 5 digit code, enter a 2 digit code), the clues that come with them are unfathomable. For example 'This is a German camera. It is pointing at a chair' and a brief conversation with someone who can (for reasons unknown and not explained) see dead people seems to be all you need to unlock a door. The only reason I passed that level was 30 minutes of hopefully hitting buttons and reading the guidebook over and over again for any mention of a German camera.

As a mystery game, I think it does its job well. It certainly kept me mystified for a long time. I think the game defiantly suffers from trying to be too complicated and far too cryptic. If you want to play a slightly too long and far to complicated mystery game that'll confuse you and leave you with a trace of a headache, FSR is the game to play.

You can support Rowan by buying Flower, Sun and Rain