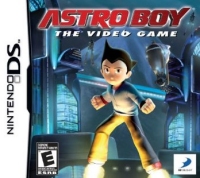 Other GamePeople columnists have reviewed this from their perspective - huh?:
Teen Gamer (Wii)

Already big in Asia, Astro Boy is here to take over the UK. Just don't hold your breath.

Starting out, the early signs look good. Wow, this kid has canons and really cool powers. 45 minutes later and I've seen these elusive powers maybe 2 or 3 times in between lame punches and badly-timed thrust jumps from a side-scrolling perspective. Yup, that's it. The game has you killing bad guys as you charge along metal-looking platforms and pits, grabbing energy from them to use as power ups.

This stops the flow of action. But worst it takes ages to get enough energy to use Astro's skills - for me at least. Although the DS isn't blessed with side-scrollers, Astro Boy doesn't help. I felt that this game was a shameless cash-in on a franchise I didn't know much about in the first place. But hey, nice art.

It's rare that I simply give up on a game, unless it's either too hard or I lose the actual cart. Neither was the case here, but I found myself completely bored and uninterested with the game, and not wanting to play anymore. I think it looks good, but it's simply unrewarding.

There are far better DS games out there.

I didn’t warm to this one really. Not my cup of tea and way too frustrating. One for Astro Boy fans and people seeking the wrong type of gaming challenge.

You can support Steve by buying Astro Boy