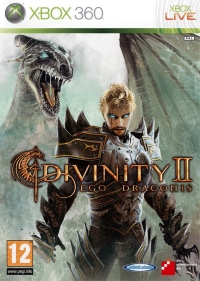 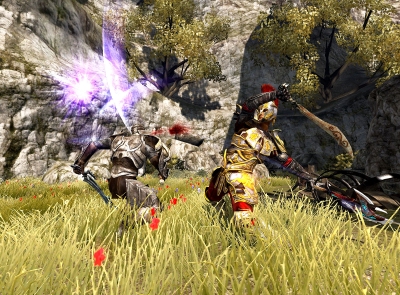 i don't really play hardcore role-play games, and the sentiment behind that choice has remained a constant in my life for many years without ever really requiring much justification. put it this way, i've never looked at one, or spoken to someone who does play them and thought, "yeah, why is it that i don't do that again?"

it's not that i consider myself too cool for orc school -- i mean the majority of my brief and usually quite socially awkward encounters with people who are into the whole role-play/fantasy 'thing' happen in the back room of a local games shop which, as well as playing host to the local fantasy enthusiasts, was, until recently, where my chess club met. as a keen chess player, i'm more than aware that i'm no higher in the hipstamatic stakes.

it's not that, then, it's just something else about the general culture of it -- something about the leather trenchcoats, and the stale smells, and the 'fire dwarfs' and the ubiquitous lack of ability to make normal eye contact. it's just never seemed like my 'thing'.

however, upon proper investigation, most things in life tend to reveal the potential for greater richness and fulfilment than was obvious from the outside. as such, (i told myself as i sat down to play) perhaps Divinity II: The Dragon Knight Saga could prove to be something of an eye-opener?

in reality, however, the opposite happened. i'll be surprised if ever there were a more wholehearted endorsement of a stereotype. the experience of playing it was the equivalent of going to France for the first time and meeting noone but beret and onion-string clad mimes who compulsively snog whilst snootily explaining to you that they are striking over the price of cheese.

most things in life tend to reveal the potential for greater richness and fulfilment than was obvious from the outside.

it couldn't have been more like how my laziest, most cynical self imagined it would if they'd come and forced me at mithril-bladed sword-point to write it myself, drawing only on my patchy knowledge of The Lord of The Rings, The Gormenghast trilogy, one or two of the names of figurines from Warhammer and some of the things a weird kid on my school bus used to draw.

"right, OK, so there are loads of dragons, yeah, and they're bad (you can tell that from the fire). right, and there are hunters with swords and axes and bows and arrows, but it's not that straightforward, because the main character becomes conflicted about his own role as a hunter in relation to what is evil and what is good -- like maybe he starts out as a dragon killer and then, somehow that doesn't really need to make sense, actually becomes a dragon. so the hunter/hater, becomes the hunted/hated. ahhhhh!?

... but, right, wait, there's more, it turns out actually (used in the loosest possible sense) that there is something/someone who is worse than dragons, someone who is really evil, sort of the personification of evil, you know being eaten up by their commitment to it -- like in every other fantasy story ever. oh, and their name should definitely be damien -- like in The Omen."

is that good? please don't kill me.
actually, on second thoughts, do.

so, here's the nature of the depressing chase to which we should probably cut so that we can all do something more rewarding:

i just couldn't help thinking that it can't be thought of as good by people who are into that sort of thing, it just can't -- can it? then i went online and found quite a few rave reviews from people who sounded vaguely knowledgeable about the 'scene'.

well, if you're into this sort of thing, then fine play it. go and play it and like it if you want. just please don't bring it near me. i'm tired enough most of the time without having to sit through tedious cut-scenes of poorly rendered and thoroughly gormless characters explaining pointless details about why i have to go around learning to read people's minds and then become a dragon.

i'd love to say that, like John Daly Prostroke Golf (one of my front runners for game of 2010) it's clearly supposed to be a joke, but i fear it is all too much not. unlike, that is, the terrible puns, puerile names and in-gags liberally sprinkled throughout the story, which were clearly designed to dispel the (non-existent) tension, make the game my (only) friend and reassure me that it's OK to like this sort of thing as a full-grown adult man, but actually did none of these, but instead made me want to rip off my curled big toes and use them to flick out my tainted, dead eyes.

i'm sorry if you're a massive fan of fantasy/this game and i've annoyed you by saying mean things about it.

all in all, i think what i'm saying is give it a miss. but then, to be honest, i don't imagine there are many of you who are still reading this that thought you'd give it a go in the first place. certainly don't buy it for someone else -- this is most definitely a game that should only be bought by people prepared to live through the consequences themselves.

i'm sorry if you're a massive fan of fantasy/this game and i've annoyed you by saying mean things about it -- if that's the case, please use the comments space below to make the case for the game and the genre in general, or, if you're too annoyed for even that, then why not set your rock trolls, elf archers and vicious double-headed serpent-moths on me?

You can support by buying Divinity II: The Dragon Knight Saga