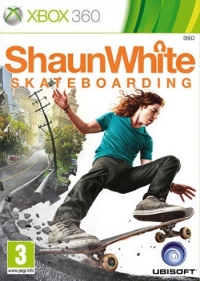 Other GamePeople columnists have reviewed this from their perspective - huh?:
Scripted Gamer (360)
Reporting Gamer (Wii) 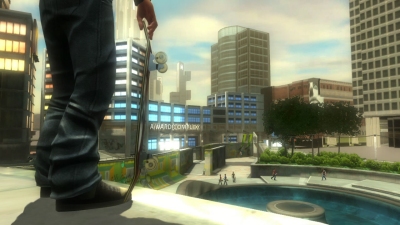 it's quite amazing that every so often someone emerges in a certain discipline who has the ability to go far beyond their peers. such people become phenomena, and Shaun White is such a person. pretty much everything that the artist formerly known as 'The Flying Tomato' has touched in the last five years has turned to gold ...except, that is, for his mass of ginger ringlets and this stinker of a video game.

yes, i'm afraid that the Midas-touch has once again proven flawed, and in no less spectacular fashion than when the eponymous mythical king first needed a tinkle.

groomed from childhood by no less a tutor than Tony Hawk himself, a record-breaking video game empire was surely supposed to be a key aspect of the plan for the flame-maned snow/skateboard messiah?

but, alas, it is not to be. the fairly mediocre Shaun White Snowboarding has been followed by the downright lame Shaun White Skateboarding. ah well, it could hardly have happened to a richer man.

given just how good and near-universally popular EA's Skate franchise is, i was intrigued to see where Ubisoft would go with Shaun White Skateboarding - never, in my drunkest dreams, however, would i have correctly guessed their 'spin' on a skateboard title.

in what is probably its first mistake, the game depends fairly heavily on a strong narrative trope. the dystopian world of the game has become captive to an evil anti-emotion regime called The Ministry, who for some reason have kidnapped Shaun White and, in a move reminiscent of the evil guy from Who Framed Roger Rabbit, have drained the world of all its colour.

watching this not so miraculous transformation occur gets really dull, really quickly.

fear not, however, because, armed with your spangled skateboard, you can k-grind, tre flip and melon grab the world back to life, spreading colour and vibrancy wherever you trick.

unfortunately, there are three main problems with this concept:

a) while the world controlled by The Ministry looks drab and pretty lifeless, it does however look quite sleek, refined and basically like a proper city. as you spread your ollies of joy, however, it turns into sickly-coloured, architecturally chaotic mess which is uglier than when you began.

2) watching this not so miraculous transformation occur gets really dull, really quickly and only serves to draw attention to the boring, poorly rendered visuals.

thirdly) and most troublingly of all, given that the concept of the game is bring life and emotion back to a reality that's been captured by a ubiquitous malignant force, it is beyond ironic that as you 'brighten' the drabs streets, you expose posters, billboards and other branding advertising the game's sponsors. counter-culture this ain't.

as for the skating, you control things by means of a dumbed-down, less precise and less instinctive version of the Skate scheme. the left-stick controls your direction and the right is flapped around to make tricks happen - and given the response on offer, there's really little point in being more specific about it than that.

as i was yawning my way through Shaun White Skateboarding i became aware that it had basically become an ultra-high concept platformer.

given how extremely forgiving the mechanic is in terms of landings, and imprecise the control scheme in terms of trick selection, it felt clear to me that it is pitched squarely at a non-skater audience. which is probably a wise choice, given the direction the game ends up taking.

one of the more 'kooky' aspects of the Shaun White Skateboarding world is the ability, neigh, necessity to use a new mechanic know as 'shaping'. basically shaping allows you to extend existing objects - mostly rails early on - beyond their physical length, as you ride along them, in order to extend your interaction with them, and in particular to create a new path between objects or levels.

as the game progresses, so your 'shaping' skills increase - enabling you to raise up whole ramps or blocks out of nothing - and the extent to which you must rely on them for progress.

given the combination of the quasi-Orwellian overtone of the narrative and this strange 'power', i couldn't help being reminded of Alex Proyas' brilliant and over-looked sci-fi masterpiece Dark City in which sinister beings called The Srangers 'tune' (expand/improve) a city at night in order to study the effects of the changes they make on the humans living therein.

aside from this amusing association, 'shaping' is basically one of the most stupid and pointless concepts i've come across in a while. also, it turns out to be responsible for tiping the game from 'poor' over into 'unplayable'.

as i was yawning my way through Shaun White Skateboarding i became aware that it had fairly quickly stopped being a below averagely good, thoroughly oversimplified amalgam of Skate and Tony Hawk Pro Skater, and basically become an ultra-high-concept platformer.

as i was yawning my way through Shaun White Skateboarding i became aware that it had basically become an ultra-high concept platformer.

the further through the game, the less the tedious challenges i needed to complete in order to progress became about mad skating skills and the more they became about accessing things and places by means of the magic of 'shaping'.

for the most-part Shaun White Skateboarding ducks the problem of needing to exist (presumably for marketing/profile reasons) but not being anywhere near as good as older skating games, by relegating the skateboard to the role of more or less a mere vehicle.

i could go on, but this is all you need to know: if you want a skateboarding video game get Skate or Skate 2. if you like high-concept platformers try Enslaved or Limbo. on no account should you buy Shaun White Skateboarding, unless perhaps your obsessed with high-concept, garish, faux-'street' architectural makeovers, you're a desperate insomniac and/or you really like repetitive things repetitive things.

you just got warned.

You can support by buying Shaun White's Skateboarding