The Adventures of Tin Tin 360 Kinect 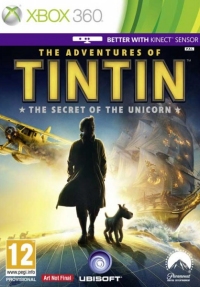 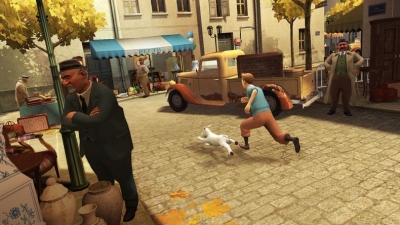 the release of the new Tintin movie prompted a recent TV broadcast of Tintin et Moi, Anders Østergaard's fascinating 2003 documentary about the comic book character, and, more centrally, his creator Georges Remi, who wrote and illustrated twenty three Tintin books between 1929 and 1983 under his famous pen name Hergé.

what saturates Tintin et Moi, but is unfortunately largely lacking in both Stephen Spielberg and Peter Jackson's 3D digimation, The Adventures of Tintin: The Secret of the Unicorn and our subject, the spin-off game of that film, is a clear sense both of Remi's great craft as a writer, and his immense emotional and political investment in the Tintin canon.

the original Tintin stories represent the passions, fears, hopes and frustrations of a deep thinker distilled into the idealised and romantically naive adventures of a plucky young reporter and his feisty, dependable dog. alas, and despite borrowing large amounts of the plot from sections of various books, in the hands of Spielberg et al, the all bite has been extracted and the romance is more the colourful candy floss so loved of Hollywood than that of the politically charged European tradition.

to me, the film makes it clear that the guising, fundamental desire was to do justice to Herge's design - to his drawings rather than his words. in this sense, Tintin follows in the footsteps of the mistaken attempts by several filmmakers over the last decade or so to represent comic books on screen by means of the assumption that capturing the 'spirit' of the books means simply reproducing the right kind of aesthetic.

in the case of The Secret of the Unicorn, it is more appropriate than usual to treat the game as a near relative of the film given the explicit involvement of Jackson and Spielberg in its development. in a sense, their role in the game's production is representative of what i see as the most significant flaw in the wider venture. listening to them both being interviewed, it is clear that they saw themselves as primarily there to protect their film's brand image by making sure things 'looked' right.

lacking a clear sense of Remi's immense emotional and political investment in the Tintin canon.

however, while the interface is slick, the animation crisp and for the most part the level design fairly pleasing to the eye, the visuals in the 3D sections and cut scenes offer little to write home about. the voice acting is excellent, but somewhat spoiled by the expressionless, plastic-surgery-addict-esque faces of the character models which perform the minimum of movement in time to its lilts.

like the film, but perhaps more so, the game relegates the role of meaningful plot and character development and relies instead on clichéd personality traits and a series of set pieces. however, unlike its silver-screened sister, in the game these distinct sections are not even particularly impressive in their own right.

what is more, when the repetitive, dull, repetitive, oddly old-fashioned, overly-simplistic and repetitive platform-based mainstay is jarringly interrupted by a vehicular-based level, a simple puzzle or an obviously Kinect 'friendly' 3D event - like a sword fight aboard a pirate ship - the result is mostly a baggy, laggy and equally monotonous five or ten minutes.

if, like most of us, you're still looking for that killer Kinect title, keep looking. if available, Microsoft's underwhelming, over-priced webcam yet again plays a fairly uninspired role, and i found that its performance was frustratingly patchy at best. it could be described as yet another surprisingly democratic use of the peripheral, in the sense that those who don't have it should know that using it adds little by way of enjoyment. however, i'd go further and say that here it actually makes for a worse experience than if the same sections had been simply made better for a regular controller.

i am almost certainly not in The Secret of the Unicorn's target demographic.

while the visual and Kinect-based weaknesses of the 3D sections is somewhat mitigated by the (not necessarily meritorious) fact that you spend a significant majority of the game running, jumping and (especially) crawling around its many and fairly slickly rendered 2D platform levels, the key question is whether or not there is enough substance to reward even the short time required to work through these glossy, yet tiresome and uninspiring environments.

of course, at this point it is worth taking a step back and being perfectly clear about the fact that i am almost certainly not in The Secret of the Unicorn's target demographic. but then, upon reflection, it is actually difficult to see who is.

the game carries PEGI 12 and ESRB 10+ ratings, mostly on account of its violence - which, while overtly cartoonish in style, is fairly relentless. although my sense of Tintin as an innocent and fairly weedy yet cunning reporter, stealthily slipping in and out of risky situations on his quest for the truth is possibly an overly bookish interpretation of Hergé's protagonist, i honestly can't say i remember any stories in which Tintin endlessly punches people in the face, or shoots them with a pistol from the sidecar of a speeding motorcycle.

the problem, however, is that the boring, perhaps even retrogressive level design, simple (and partially automated) controls and straightforward puzzles are not realistically going to engage many children over the age of six or seven.

in addition to the standard story mode is the offline co-op mode in which you guide Tintin and Captain Haddock through a series of similar, but perhaps slightly more interesting levels based in the world of Haddock's dreams. this mode offers a little more in the way of features and challenge, but for me it definitely amounted to too little, too late.

ultimately, The Adventures of Tintin: The Secret of the Unicorn is a boring, simplistic, uninspiring and uninspired old-school platformer which will struggle to find an audience. its chipper, sleek animation and shiny stylings cannot save it from the tedium its repetitiveness generates and the lack of satisfaction offered for solving its undemanding puzzles and completing its straightforward levels.

what promise there is - like in sections where you are required to complete certain tasks with specific characters on the basis of their individual traits - are far from fully or fulfillingly developed.

adults and teenagers won't buy it, tweenagers won't like it and small children won't care about it. if you are or have a six year old who loved the film, then perhaps rent it for an afternoon. if not, then leave it be.

You can support by buying The Adventures of Tin Tin