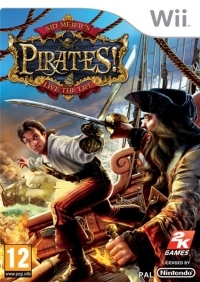 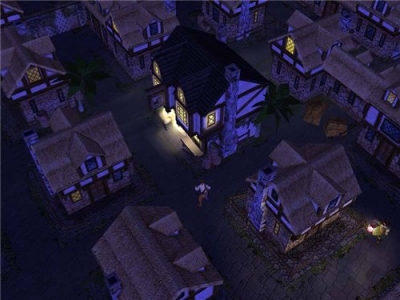 hello. guess what? (please stop reading and try to guess -- do not, i repeat do not, allow the title of the review, the words in the url, or the knowledge of why you came to this page in the first place to inform your guesses)... that's right, yet another version of the remake of the 1980s Commodore classic Sid Meier's Pirates! has been made. this time for the Wii.

the main upshot of this is that if you love PC games, but instead of having a PC, have a Wii, and also have loads of patience and love nothing better than having that patience tested over and over again, then good news -- you could be in for a magical Christmas if this ends up under the tree.

troublingly, those involved seem to be operating under the same dreadful logic as Macbeth's famous attempt at self-justification: I am in blood stepp'd in so far, that should i wade no more, returning were as tedious as go o'er. (Macbeth, III, 4)

you must go about your piratical business in all its various forms.

another example would be Rolf Harris.

anyway, none of that has stopped them, so here we are. the fundamental flaw, as i implied in the introduction (yes, 'implied' not 'inferred' -- there's a big difference and if you don't know it, look it up), is that this game, like all those of its ilk (right from Civilization through to all the others) is superbly suited to mouse controls and perfectly suitable for PC gamers. where it doesn't work is on/with/for other formats/controls/audiences.

not that it really matters, given the facts above, but for no other reason than to fill up space, encase you've never played it, let's talk a bit about what the game is like. it's less of a god-sim than Civilization, in that progression is filtered through the exploits of a main character, but it plays in very similar ways.

you're a pirate on the Caribbean Sea (wait a minute, they should make some stupid films like that) and you must go about your piratical business in all its various forms: scourging the high seas, searching for lost treasure, and so on all in the over-arching context of an attempt to find the scaly sea-toad who once captured your family. yaarrr, it be heavily cliched.

the controls are super-frustratingly clunky because what you need is a mouse.

with even less postcolonial sensitivity than Civilization used to manage, you inhabit a Caribbean controlled in various proportions, depending on the precise portion of the C17th that you select, by the English, Dutch, French and Spanish. pledging a potentially meaningless allegiance to one of these nations, you attempt thereafter to intercept, raid, pillage, trade, woo and duel your way to the control of as much land and sea as you can.

as always, the game mainly plays out on a large map, with the painfully slow movement and tedious combat relying on the standard turn by turn and roll-the-virtual-dice type mechanics. however, minigames like lock-picking, duelling with enemy captains, or dancing with buxom ladies provide some variety of format and control, and can be entertaining (although only the first few times and if they work properly).

attempts have clearly been made to make the game more accessible, both by means of the Disney-like minigames and also the lack of the ubiquitous, massive manual that funs might expect. unfortunately, removing the need for a hefty, explanatory tome and simply not supplying one are not the same thing, and here they've just gone for the latter approach.

the controls are super-frustratingly clunky because what you need is a mouse.

however, the more significant issues are the predicable fruits of the fundamental problem i outlined above:

basically, sorry Sid, but just no.

Macbeth was right, either way it's tedious.

You can support by buying Sid Meier's Pirates!