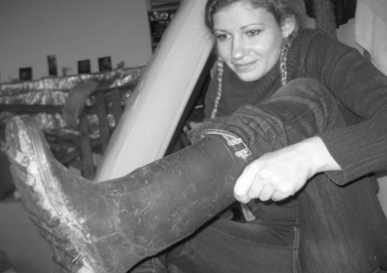 One day I was sitting at my computer, idly searching the net and generally procrastinating from creating something fabulous and meaningful when a little email dropped into my lap. It was from a producer at the BBC. Asking me to write a song for the program Gameswipe. My god, how did this happen, somehow Charlie Brooker had come across my humble little tunes.

I since found out that one of you twittered him and told him to check me out - thank you Tatter12. Where would we be without twitter? And fans who spread the word?) And so the songwriting process began. They wanted me to write something sweet, cutesy, folky. They wanted it to be very short (a minute and a half max), and they wanted it to be a review of the game. Gulp. This is what I get criticized for the most. Call myself a reviewer?

I wrote song after song. Too long. Not enough references to the game. Crap melody. Boring. Not cute enough. The pressure. The extreme self-doubt of the creative in creation. When I wrote the song that eventually made it onto the program I didn't like it. Not enough. But I had totally run out of time. I probably would have kept writing songs forever about that crazy game (I pretty much had to play it with my eyes closed) (No joke, when I first played it i stood up and immediately fell over).

And so the little country girl got a free train ride to london. Off she went to the big city with her guitar in one hand and her ukulele in the other, wearing the floaty folky clothes demanded by the BBC. Accidentally I went in my wellies. In those days I was living in a field and wellies were a permanent appendage. I had meant to change into a cute pair of something but it was only when I was stepping onto the train that I saw I was wearing my heavy black boots under my flowing skirt, and it was a boiling hot day.

After meeting the film crew in london I kept trying to explain about the wellies but they couldn't quite process the fact that I was living in a field, and I think they thought I was making it up. Or had some kind of wellie fetish (which I do). We went to Hampstead Heath to shoot something that gave the impression of a field in Devon (where I had just come from). For someone who makes all her videos on her own on a tiny little thing, all the big cameras and fluffy mics and five men running around was quite exciting.

It was a beautiful day and I sat back in the long grass and sang the song 82 times. People passing by in the park slowed down to stare in an English non-intrusive way, hoping they were invisible, not able to ask what we were doing like any normal american would.

So the video was made.

I wanted to make my own, non-BBC-shiny-cameras-million-different-angles video.

And so this week I did. For a minute and a half song it took me way too many minutes. I was trying to make the kind of video that the coolest kid in school would make. ie. something pretty rough around the edges by a kid who has no idea what they're doing. That is me making some kind of sideways excuse for my lack of animation skills. I had no idea what I was doing when I was making this. It was loads of fun.

Here is the song, just for you. Hope you like it.

You can support Rebecca by buying The Real Madworld Video