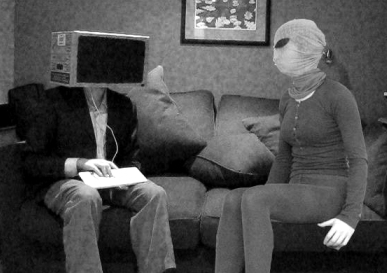 I am prancing about my garden dressed as an alien, filming my Silent Hill video. Next door two builders are busy at work building an extension. They see the ufo flying by and think nothing of it. Later I come out dressed as a normal human being and they wolf-whistle me. What does it mean, thinks the alien. She does a little bit of research.

'I just want to let you know,' I say, 'that I don't appreciate being whistled at.' They stop smiling.

'I don't agree,' I say. 'Whistling is for animals' (this she got from the research). 'If you find me attractive,' I say, 'I'd rather you'd communicate it to me as if I were a human being.'

The alien is interested by this response. It is as if the big muscly man has turned into a little boy being told off by his mum. I feel that pull in me, to want to look after him and make it better. Instead I walk away a little bit sad that I am desired either as a mummy or a sex object. What about all the things in between? The alien and musician and truth-teller in me want to start a riot. The sister and friend and ancient seer-woman want to flatten the bull-shit out of it with a love bull-dozer.

It is not so easy to step out of the age-old virgin/whore binary as a woman. Sexy women are everywhere in our culture and also nowhere. We don't really know how to be sexy in real life because we fear being placed in the whore category. At least I do. I have struggled with this binary all my life oscillating between the two like a confused ping-pong ball, wanting to please the people who want me pure and the people who want me dirty (secretly) and more deeply my own sense of myself as a human being, erotic, innocent, feeling all of it. More recently I've discovered if I really want to understand my sensuality then I need to go beyond the confused, supposedly empowered sexuality of our culture to something a lot deeper. To what it really means to be a woman.

There's no help from games here. There are two types of women, the kick-ass ones with a huge appetite for gore and the pretty ones who hang off heroes, cars, guns, looking serene about their lot in life. Both have boobs big enough to nurture a whole army of babies.

Is this really all we want from our women? Obviously not. We want companions, we want women in our lives who deeply know their own gorgeousness. We want women who have the courage to be who they really are, bringing their rage, their grief, their intense capacity for feeling, for sharing, for knowing to the cultural table. And I don't see this happening. I search for women such as this in games, on page three, gyrating in music videos, in the houses of parliament and on the streets where I walk. I feel like I know a secret about women that no one's talking about but that we trade on all the time. Women are sexy to their core, effortlessly. They are enchanting, wild, powerful, deeply connected creatures and we long for them.

And yet we make ourselves small enough to conform to sexual norms we have long grown out of, obsessed with sex because we've locked it in the bathroom, obsessed with breasts because we're starved of nurture, skulking around like teenagers with no one modeling what real, adult sexuality looks like. It's time to re-write the program.

Can anyone make me this computer game please?

You can support Rebecca by buying So Ponders Binary Girl