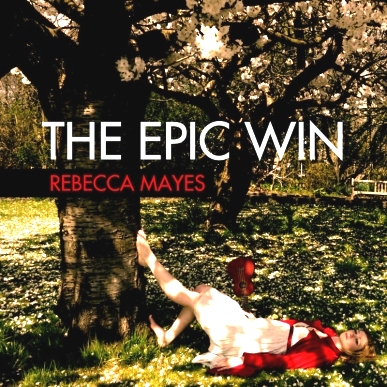 Rebecca Mayes is doing something entirely new - releasing her debut album. 'The Epic Win' is out 28th May and brings together her collection of now famous videogame song-reviews.

This is the next step for her creative output since setting out on Game People, finding her voice on The Escapist Magazine and heading for the stars on Charlie Brooker's Gameswipe show. With one of Rebecca’s songs being is featured on this summer's Glastonbury Festival CD and The Great Escape CD, there's no telling what she might do next.

She is bringing together two opposing forces in a juicy jumble of creative conflict. Her beautiful, heart-warming, soul-food songs are musings on the latest video-games. That's right, each song is some kind of review, some kind of response to a game, one of those games that so many people spend their lives playing.

She got into this quite by accident when a friend asked her to write a song for his web site http://www.gamepeople.co.uk. Immediately the song spread like Internet fire across the gaming world. Who is this sweet-singing, witty, subversive, quirk-girl and why is she singing about games?

Rebecca wrote a few more songs and before long she found herself at the centre of a media storm, in all the top gaming magazines and web sites, with fans demanding more. The well-known gaming web site The Escapist Magazine quickly offered to employ her to write a song for their site every fortnight. And not just write a song but make a video too. Cue Rebecca dressing up as the latest video-game characters and playing her instruments against the backdrop of Dartmoor, Devon's quaint steam train, and her local laundrette. The result is the most quirky and creative take on the art of review out there.

This girl plays all the instruments herself, records and produces the songs, shoots and edits her videos, all within the space of two weeks. Although a self confessed nu-folker she has experimented with a range of genres including heavy metal, eighties synth, classic rock and neo-country. The rest of the songs are sparkly, acoustic, contemporary fusions of post-pop folk. Banjo, accordion, glockenspiel and zither are her signature instruments, with keyboards, guitars and beats layered in support, creating a rich, charming sound all of her own.

Her voice is reminiscent of Kate Bush, Joni Mitchell and Regina Spektor, at turns both strong and fragile. She makes exceptional use of it with exquisite harmonies, choral backing and various vocal hooks, making the songs exceptionally catchy.

Then came the next level. Charlie Brooker commissioned Rebecca to write a song for his latest BBC program 'Gameswipe'. She wrote him a sweet, folky lullaby about the frenetically violent game 'Madworld' and sang it sitting in a cornfield with scenes of the blood-soaked game spliced in between shots of her ukulele, blond curls and floaty dress.

Suddenly something that seemed only relevant to the gaming population gained the attention of mainstream culture. The songs speak beyond the medium they refer to. Full of heart and intelligent reflection they point to a yearning for deep meaning, as most good folk songs do.

'Video-games are fascinating,' says Rebecca, 'there is a huge pre-occupation with distorted power - the power to kill, control and win. A lot of what comes out in games I see as an exploration of the human psyche, especially what is repressed. The gaming industry seems to be a meeting ground for a lot of what is live in our culture at the moment, bringing together elements of film, music and technology, and it is increasingly becoming the majority past-time for young people. There is a lot that I feel drawn to comment on.'

Rebecca pleads with gamers not to shoot zombies in Resident Evil 5 ('they just need to be loved'), she rails at the commercialisation of women and violence in Velvet Assassin, and she highlights the homogenisation of beauty in a song called 'The Mirror'. Her review of Modern Warfare 2, a game which grossed more than Avatar, is a touching love-song to gamers worldwide urging them to 'fight for their lives.' She sings, 'will we talk about this game for years to come, or will we talk about you, oh what might you do?' Rebecca is doing what no other has done, creating a never-before-heard-of niche that only she could fill, with true creativity and originality.

Game People uniquely offers a whole range of varying opinions on the latest videogames. Each writer has their niche perspective and, like you, come from all walks and ages of life.

We are the antitheses of mass media. We are social, mini, friendly and failing. By side-stepping the need to be perfect, comprehensive and score-driven we hope to offer something more personal, intimate and interesting.

Our artisan reviewers walk their own path, but are united by a desire to fit some games in amongst busy lives -- parents, young adults, mid-lifers, teenagers, retirees and artists. Read a few and you'll soon find someone a bit like you.

As well as the more common handwritten reviews, we also like to engage with more unusual ways of reviewing games. You will find us using songs, origami, photography, animation and even teletext to capture their feelings about a game.

We may be small, but we are heard a long way away. Game People writers have featured (stared?) on BBC TV and Radio, Arts Festivals, mainstream print like Official PlayStation Magazine, write online for people like Wired, IGN and Game Pro. Then finally there's Game People Calling on The Escapist.

You can support Rebecca by buying The Epic Win