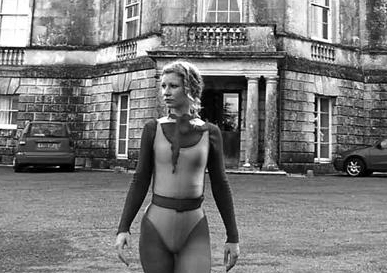 I was distraught when they told me I had to move my studio out of the little stone cottage. I had been there for a year and I had made nearly all my escapist tunes there.

Where would I go? And what would the acoustics be like? And surely nothing else would be as affordable?

The very next day I found a palace. A little room in the West Wing, for next to no rent. Time to break out the superhero costume.

It was the perfect location for my Crackdown II video. There I was writing about capitalists and I was moving into a palace. The timing couldn’t have been more perfect. A vineyard, incredible gardens, a swimming pool, views over the estuary, it is one of the most idyllic places on the planet. By some stroke of good fortune (and a great deal of wheeling and dealing), a penniless musician found herself strutting those corridors in a fatsuit made of tights.

Alas, the arrangement was temporary, only until this and that and the other, and now I find myself moving on again, with palatial heights behind me. And yet, what a summer to be there.

This week I will move into my new studio. It’s not quite a palace, but it’s a beautiful building with views of fields and occasionally, cows. There I will hunker down for the winter and make my non-game-related Rebecca Mayes album. I am doing one escapist video a month now to make this possible, and by the spring I hope to have something gorgeous for you, music for music and nothing else.

In the meantime, in memory of my affair with capitalism, here are the lyrics to Freak the Superhero.

You can support Rebecca by buying Freak The Superhero