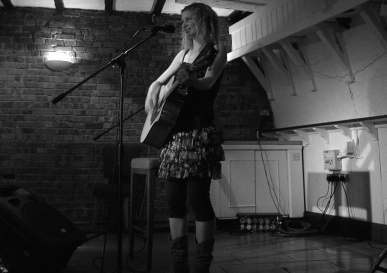 Gamecity was an absolute joy from start to finish. It’s like belonging to a big family where everyone is welcome; uber-geek gamers, postmodern post-gamers, extremely talented game designers, and the normals walking off the street looking for ice-cream. Not sure which of those categories I fall into, but I spent the entire time like a hyper-active child, eagerly chatting to everyone as if I haven’t seen human-beings for the last ten years of my life.

On Friday morning I gleefully piled a mountain of all-you-can-eat hotel breakfast in, whilst Adam Saltsman ate toast respectably opposite me and filled me in on the artwork he had been gathering for the game we were about to make. I say we. I mean he of course, although he was very generous in including me as if I have any sort of clue about how the miracle of code into game happens.

I was relieved to arrive at our workstation and set up my guitar and microphone, no maths for me. I had no clue what I was going to do but as soon as the guitar was in my hand the music started writing itself. At this point I had little to no idea what the game was going to be because neither did Adam. All I had to go on was the adorable artwork that was pinned up on the walls around us and a sense of Adam’s flavour from our conversation over breakfast.

The rest of the story I will show you later this month on the escapist, where you’ll also be able to hear the music. But suffice to say by the end of the day I was buzzing, which was guaranteed with that amount of adrenalin, machine-gun background noise, and constant visits from various press and cameras. We unwinded by taking over a nightclub with some excellent music provided by a band called Gw3m and I danced non-stop like a total loon. Armed with glow sticks I might add.

The next day included a non-dating speed-dating curry lunch, a little acoustic gig by me, an impressive impromptu performance by Scripted Gamer of a play he had written that very day, and some even crazier dancing, and it wasn’t just me this time.

I love the fact that Gamecity seems to be a festival more about people than anything else and it brings a human face to what is far too often aloof and unreal. I for one enjoyed it more than any other festival I’ve been to this year.

- - - - -
Rebecca stars on the hilarious, quirky and downright brilliant, The Escapist Magazine.

You can support Rebecca by buying GameCity Live