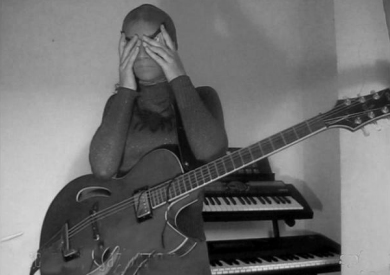 Bionic Commando, bit of a tricky customer this fella when it came to lyrics. I found it boring, pretentious and disappointing. Yawn.

I don't pretend to remember much of the 80's but I did grow up loving the arcade games and I did have a pretty impressive mullet. I toyed with the idea of recreating it for the video.

Even without the mullet I got thrown out of Paignton arcades, where I filmed some of the video. They were very angry indeed. They even put their hand in front of my camara like people do when they've been caught out on a documentary as some kind of fraud. I told them not to worry and that I was making a video for a song that I've written as a review of a computer game and they looked at me like everyone does when I tell them that. Concerned.

I regret not taking my spiderman outfit to the streets. It was quite a good effort, except that the eyes kept falling off and I spent the whole time pressing them into my head like I was trying to kill off my sight. I kept a little clip of me doing this in the video because for some reason I find it comic and always tell people when I show them this one: my eyes kept falling off.

Take me Back to the Eighties - Lyrics