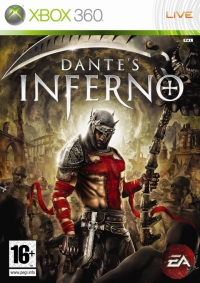 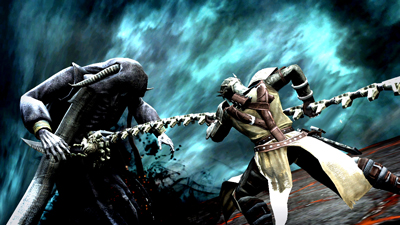 Dante's Inferno for Xbox 360 and PS3 takes on Dante Aligheri's classic work of literature and turns it into a blood-pumping action/adventure game that shares more than a passing resemblance to God of War. Taking on the role of Dante, you'll go on an epic journey through a nightmare world, fighting the terrible and disturbing demons that reside in the Nine Circles of Hell to rescue your beloved Beatrice. Combining the epic nature of the source material and offering the same bloodthirsty visual experience you’d expect from the makers of Dead Space, Dante's Inferno will send you to hell and back in this journey of revenge and redemption.

Taking a classic work of literature such as Dante's Inferno and making it into a violent and visually gory experience for home consoles was always going to raise eyebrows. But Visceral Games, the makers of the critically acclaimed Dead Space, have created a game that fits the poem like a glove and carried on Dante's wishes to bring storytelling to the mass market.

Much of the game's shocking visuals and arresting appeal comes from the interpretation of Dante's Nine Circles of Hell and the Afterlife. The insane imagination taken from the classic work is here in great abundance with each of the circles having their own unique art-style, enemies and end bosses. Some of this work is truly amazing with the range of Shades and Demons leading to some challenging battles and imagery that replicates a twisted otherworld to a disturbing degree.

Your path is to descend the circles of hell in order to rescue your wife and along the way absolve yourself of your past crimes. It's just as much the twisted story as the original poem is and Visceral Games have done a wonderful job in creating two different approaches to the game.

If you’re interested in the fiction and the world that Dante wrote about then you can have the game narrated by Virgil, who will explain the events and offer backstory to the various stages of the game. When it comes to fighting the Shades that inhabit the circles you can discover their names and find out more about them in the menus. There's a ton of narrative and literary material strewn about the game that makes Dante's Inferno into a bizarrely intelligent and moving experience. Or, if you prefer, you can turn all those options off and play the game as a mindless demon-killing experience. This unique approach is superb in allowing you to choose how you want to play the game and shows that Dante's Inferno is far from a cheap license-free cash-in.

Combat itself takes a very similar form to that of God of War and it's to Dante's Inferno's credit that these comparisons exist at all. Controlling Dante feels incredibly responsive and all the movement from dodging attacks to dealing out damage happens with an instant 'pop' that feels satisfying and fair. One of the more interesting aspects to the game is the upgrade system - this mechanic is driven by the acquisition of souls which you can acquire by an ordinary, guaranteed kill - Punish, or by attempting to Absolve. Absolving comes with its own skill-based mini-game which rewards you with double the usual amount of souls if you succeed or gives you nothing if you fail. There's a real sense of a risk/reward theme going through the game and while some of it lies with the moral choices you have to make along the way, most are more tactics-based.

While the individual parts of Dante's Inferno feel very similar to the reigning champion of fighting games - God of War - they add up to a very unique experience. That uniqueness comes from the way the game treats its source material and I found myself getting caught up in the fiction despite the videogame-nature of Dante's presentation. I love epic stories and narratives that make me think and put my through an emotional rollercoaster. I didn’t expect to get that level of quality from this game but I've been wonderfully surprised. In fact the biggest disappointment I've had is with some of the combat and how difficult the system the game has chosen has been to learn. Combo's always send you walking forward and with many of the epic fights in the game taking place near sheer drops or crumbling buildings, I died far too many times by falling to my death.

Dante's Inferno for Xbox 360 and PS3 is tremendous action game that offers an experience very similar to that of God of War at first glance. But delve beneath the surface and you'll find a game that's as deep as the source material it's based on. The bloody nature of the visuals and the insane interpretation of the Nine Circles of Hell mean that Dante's Inferno will entertain and enthral whether you like your videogames erudite or just plain fun.

You can support Jan by buying Dante's Inferno